Rigby has worked in food for nearly two decades as a cook, journalist, editor and events host, and at Fairfax will also work across the The Sydney Morning Herald Pyrmont Growers’ Market and NSW Food & Wine Festival presented by Citi. 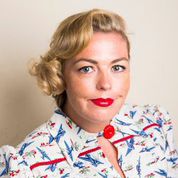 She was national chief food and drink critic for Time Out Australia and appears on several radio and television programs, including as a guest judge on Masterchef Australia. She has also judged the World’s 50 Best Restaurants, the World’s 50 Best Bars, and various national cocktail competitions. She has travelled widely and hosted countless events, including Melbourne Food and Wine Festival, What a Wonderful World and Taste of Sydney.

In Western Australia,Gail Williams, former Food Editor of the Sunday Times, has joined theWAToday team in Perth as its restaurant reviewer. Williams’ local knowledge will be invaluable when Good Food Month launches in Perth in 2015.

Fairfax Media national editor Food and Drink Kate Cox said: “All of these appointments signal an increased investment and presence in the food and drink vertical. These new appointments will further grow our position in 2015 across events, in our Good Food sections and on Australia’s most respected food site, goodfood.com.au.

“The Good Food Guides have been printed in Melbourne for 35 years and Sydney for 30, and are the go-to, independent, highly-respected guides to new and exciting dining all over Australia. We are thrilled to have Myffy and Gemima on board and know they will bring inspiration, new ideas and initiatives to the Guides and to Good Food Month.”

Recently appointed Fairfax Events head of food James Laing said: “The new appointments are all part of a very deliberate strategy to ensure we are tapping into strong, local knowledge in all the markets we operate in.”

Commenting on her appointment, Myffy Rigby said: “I’ve been reviewing restaurants for going on a decade now and my passion is, and always has been, good times – whether that’s at a party, an awards ceremony, or reading a review.

“I’m hooked on going out. New restaurants, new bars, new cafes, visiting chefs, new talent or establishment, a great new dish on at an old favourite… if it’s a good story, I want in – and I’m looking forward to sharing that sense of discovery with Good Food Guidereaders.”