Within 25 years about 40 per cent of all vehicles on the road will be autonomous, driverless cars according to a new study by Accenture. And if such time frames make you a little sceptical, then bear in mind that by the end of this decade the autonomous vehicle market is expected to be worth $US87 billion ($A121 billion). 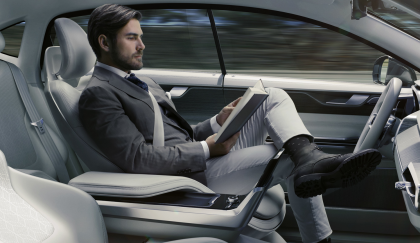 The authors say we should expect to see self driving cars on our roads within three to five years with Volvo (featured above, 2017), Google (between 2017 and 2020) and Mercedes-Benz (2025) expected to pioneer delivery.
The report, called Realising the benefits of autonomous cars in Australia, says the shift to autonomy is expected to radically reshape transport networks around the world.

Congestion, fatalities and fuel consumption will all be reduced, while other driving conditions will also be improved. Autonomous vehicles also promise to deliver safer roads, reduced environmental impacts, more compelling products and applications for consumers, and fresh revenue streams for companies.

“Human error contributes to thousands of preventable deaths each year; the self-driving cars have the potential to reduce this statistic to zero. In addition, autonomous vehicles could offer substantial cost savings.”

“By switching from traditional car ownership models to a shared driverless model, the costs of car ownership (based on US modelling) could fall from US$0.70 per mile to around US$0.15 per mile – a 78 per cent reduction,” according to the study.

Realising the benefits offered by autonomy will require a significant business recalibration by organisations in sectors as diverse as automotive production, public transport, telecommunications, energy and financial service. It will also usher in profoundly different business models say the researchers.

The study identifies a number of serious questions the industry will need to address;

• Will autonomous vehicles require airbags and make accidents history?
• Will this disrupt insurers’ existing business models?
• Who will be liable in case of an accident? Is it the auto maker or the technology provider?
• Will autonomous vehicles accelerate the adoption of alternative energy sources, and play a key role in the development of intelligent cities?
• Can the government achieve 100 per cent compliance with public vehicle regulations – eliminating traffic light and speeding violations, for example – or reduce emissions?

Burns says for Australia in particular the opportunity is ripe. “Australia’s population densities are perfectly suited … and one city in particular that stands out is Canberra.”

According to the former GM exececutive, ” Australia has the technical and manufacturing expertise – in locations such as Adelaide – to be a key player in developing the cameras, lasers and software required for these autonomous vehicles.”