With a brand value of $US32.6 billion, entertainment giant Disney remains the most valuable media brand this year, despite a 5 per cent brand value decrease since 2017.

According to Brand Finance Global 500 study, Disney maintains its leading position through its measured focus on brand loyalty, investment in new technologies, and the expansion of its valued partnerships and divisions. Such is the brand’s appeal that with an AAA+ brand rating and a Brand Strength Index (BSI) score of 92.3, it also came out as the strongest brand in the world not just within the media sector, but across all categories.

Check out the planet’s top 25 media brands below: 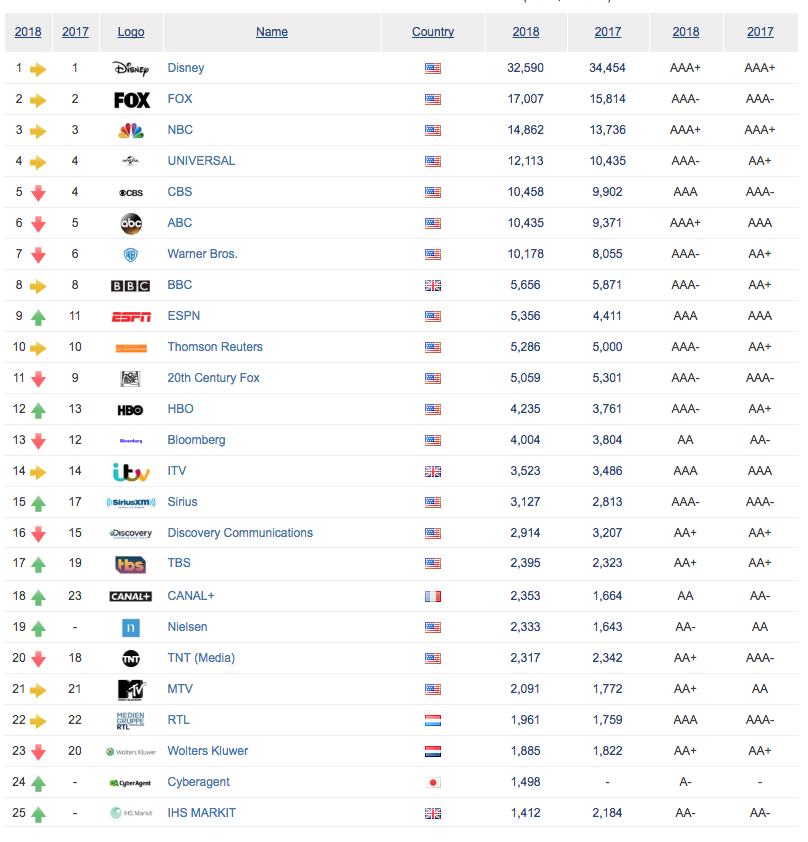 Nevertheless, with the recent purchase of a majority stake in 21st Century Fox for $US52.4 billion, Disney can develop its exceptionally strong brand to deliver more for completely new audiences.

The addition of companies like Star India – which reaches hundreds of millions of viewers on the subcontinent, Sky – with presence across the UK, Ireland, Germany, Austria, and Italy, as well as a 60 per cent stake in Hulu and plans to open a new streaming platform, mean that Disney can look to capitalise on this greater international exposure and establish its brand as much more than just a children’s favourite.

Disney’s acquisition of Star India could be a game changer in this fast-growing media market. Disney will be able to take advantage of new opportunities, such as access to cricket broadcasting rights and syndicating Disney productions across Star India’s 50-plus TV channels in eight languages and the popular Hotstar streaming service.

With over 150 million households, India is the second-largest subscription TV market in Asia, and acquisition of Star India will give Disney a strong edge over competing content providers on the continent. Star’s TV business could also bring in new advertising revenue at a time when US ad spending is growing at a slower pace.

David Haigh, CEO of Brand Finance, commented: “Disney has once again waved its magic wand and maintained the title of the most valuable media brand in the world. As a well-loved entertainment brand, Disney has a unique ability to use nostalgia to harness childhood memories amongst its customer base. Revisiting old Disney classics like ‘The Jungle Book’ and ‘Beauty and the Beast’ with live-action remakes has proved wildly popular at box offices worldwide.”