Michelle Guthrie has spoken out after being dumped as managing director of the ABC, arguing there was no justification for the company’s board to terminate her employment.

In a statement issued shortly after the ABC announced her sacking this morning, Guthrie said she was “devastated” by the board’s decision despite there being no wrongdoing on her part.

“The ABC Act fixes the term of appointment of the managing director at five years. My term includes on 4 July 2021,” she said.

“While my contract permits the board to terminate my appointment without cause and with immediate effect, I believe there is no justification for the board to trigger that termination clause.”

Guthrie used her statement to remind everyone of her efforts since being appointed to the top job in May 2016, and said she was considering her legal options.

“I wanted to continue the transformation of the ABC and to support the great work of ABC’s dedicated and passionate employees to ensure our continuing trust, quality and distinctiveness as the source of Australian culture, conversations and stories,” she said.

“To me, it is the content produced by the ABC that is of primary importance to Australians, with the technology used to deliver that content a distant second.

“At no point have any issues been raised with me about the transformation being undertaken, the ‘Investing in Audiences’ strategy and my effectiveness in delivering against this strategy.”

You can read Guthrie’s statement in full below: 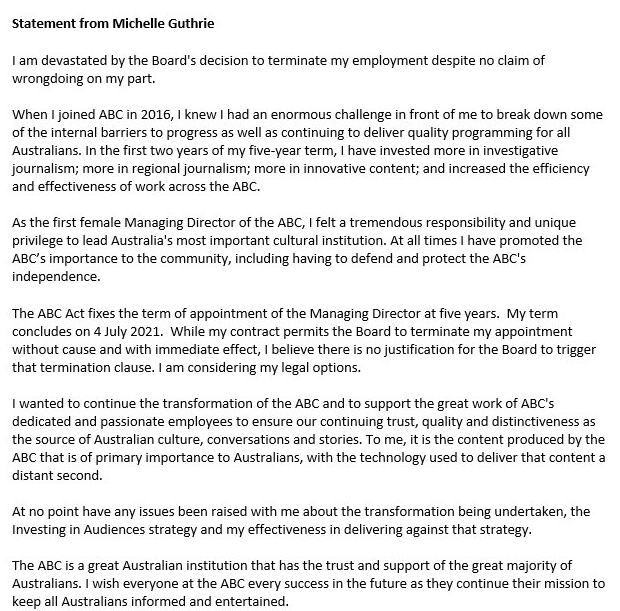