Advertise with us
Posted 2 September, 2014


Working for free isn’t top of anyone’s priority list. But you know, you’ve gotta start somewhere. Think unpaid internships to get a foot in the door or burning the unfunded midnight oil when trying to get a start-up off the ground.

Still, there’s another working for nix situation that’s a little more noble: charity work. And it’s not just for university students with a social conscience or retirees with a few extra hours on their hands.

Agencies are getting in on the act, too.

UN LTD is an organisation that acts as matchmaker pairing charities with media and advertising agency folks.

“The success of providing services to charities at either a pro bono or discounted rates comes down to the commitment of the company and the individuals to treat these campaigns with as much dedication as they would a commercial client,” says Carol Morris, managing director of UN LTD.

Morris explains agencies are often gung ho when they first engage with a charity, however after the initial enthusiasm, it all becomes a bit too much work and the charity gets put on the back burner.

“The initial interest on the part of any supplier unfortunately loses momentum and priority way too quickly,” says Morris. “The impact of this scenario often leaves the charity with a drain on their resources to maintain focus and often requires higher investment to get the job done – and this is where every charity is asked ‘what are your operation expenses’, so in this situation we are not helping them.”

For those willing to dedicate the time, the rewards are endless. Mindshare’s John Dawson and Mark Golafshan are two industry up-and-comers making a name for themselves after volunteering over nine months to bring the #Laceitup campaign to life. 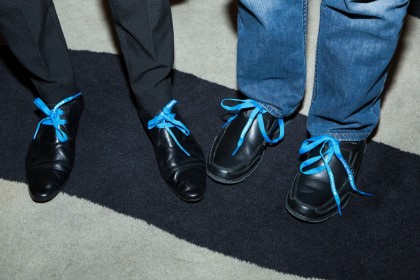 The pair have provided more than $120,000 in value to homeless youth charity Youth Off The Streets with their blue shoelaces, an idea which found its seed in an insight about homeless youths who sleep with their shoes on in order to stop people from taking them.

Another charity do-gooder is Mi9 employee Harry O’Donnell who has worked tirelessly to help out Batyr, an organisation that attempts to break down the stigma of mental health. “The media industry is in such a unique position and holds so much potential to provide real help to Batyr’s mission,” says O’Donnell. “I know I’m really lucky that Mi9 has a ‘more than just a job’ philosophy which means I get to work on stuff I care about and this – no disrespect to what we all do day-to-day – gives me a sense of fulfilment over and above my day job.”

Mi9 isn’t the only company to have integrated this type of thinking. Managing director of digital agency The White Agency, Andrew Davenport, recently sold off his secretarial talents to the highest employee bidder to raise money for the agency’s charity of the quarter.

“We want to say, as a business, that we’re prepared for you to put your time in for charity while you work for us, now what would like us to put it in to?” says Davenport. The company policy sees the agency supporting a different charity each quarter.

According to UN LTD’s Morris, much of the young talent at today’s agencies are keen to get involved and help make a difference.

“There’s a growing need there,” she says. “There’s a lot of research around how employees feel about the companies they work for if they have really solid and clear programs in place.”

Taking the notion of working for free one step further, French ex-pat and creative Marie Lefebvre is offering agencies in Melbourne the chance to hire her in exchange for a charity donation.

“When I arrived here I was thinking about doing charity work but at the same time I had to find a job,” she says.

After attending the Vinnies CEO Sleepout in June, Lefebvre says: “I was so touched by the real testimonials of the homeless and Vinnies volunteers that I decided to stop looking for a job in the traditional process and start this ‘Brief me for charity’ project.”

So Lefebvre, Dawson and Golafshan are up donating their time for a good cause but the question remains, would you work for free?