In his latest column for B&T, co-founder of Perth creative solutions agency Meerkats, Mike Edmonds (pictured below), says many brands of gone from being our friends to playing too close to the creepy space…

Your grandparents will remember a time when brands were like our little economic buddies. They paid for quiz shows to be made so TV could start at three o’clock instead of five. They printed handy road maps and gave them to us for free. They announced their new products with three minute live ads that explained all the new features, simply and intelligently. 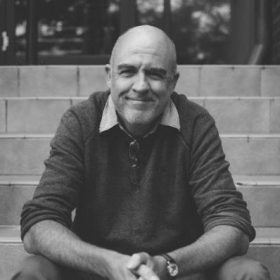 Today, the majority of brands have all but given up on authentic comradeship; y’know, being genuinely interested in us, helping us in times of need, treating us with honesty and respect. Instead, most have evolved into a desperate kind of fake friend who will go to any length to make you like them.

They watch you when you sleep

Brands are now professional stalkers. Think about it: they find out where we live, where we work, where we go on weekends, what we wear, what we think of gender equality and how many times we brush our teeth and have sex. They pay people to watch us shop and travel and eat lunch.

They then use this information to empathise with our worries (“Embarrassed by ugly toe nails?”), mirror our values (“We believe every body shape is beautiful”) and tap into our self-image issues (“Just because you’re a mother doesn’t mean you’ve stopped being a woman”).

It’s like making a cool new friend who laughs at your jokes, listens to your problems and really seems to get you, only to find out it’s because they want to sell you Amway. The good news is, we consumers are now very good at outing this two-faced behaviour.

We know what they’re up to

The duplicity of most brands has become so obvious it’s almost embarrassing. Consumers are hugely more savvy about branding today than in our grandparents’ day. We’ve watched Gruen and Mad Men. We’ve been bitten more than twice. We know the motives they present in ad breaks and news interviews aren’t necessarily the real motives of the owners and shareholders.

What’s more, social media allows us to expose brands-behaving-badly instantly and globally. We effectively live in a transparent world where there is no distinction anymore between a company and its brand image.

And yet brands maintain this sad charade, acting like children who have been found with a sweet brown mess all over their faces yet still deny they stole the chocolate bar.

So, why are they doing it?

It could be the hordes of new competitors embracing new production technologies and copying anything your favourite brand makes, only cheaper. It could be the explosion in the battle for your attention, with hundreds of new media channels appearing on our TV’s, phones and toilet walls. Or it could be because the internet has triggered a million new virtual brands to compete with the real world ones.

Whatever the triggers, the response is remarkably similar: companies have stopped looking inside their own imaginations to decide what they believe is in our best interests. In the desperate quest to meet that quarterly profit target they have given up on their own beliefs and passions. And instead, simply throw their hands in the air and ask us consumers what we want.

Time for the truth

It’s time companies stopped hiding behind brand image. It’s time they stopped pretending to only be driven by what we want. It’s time they rediscovered the vision and confidence to tell us what they believe what the world needs. We consumers tend to stick with brands who don’t sugarcoat or deceive, but tell us the truth, warts and all and let us decide for ourselves. Just like we do with friends.