Advertise with us
Posted 5 February, 2018


[B&T advises that this article deals with issues of sexual nature that some readers may find offensive] The UK’s public broadcaster, the BBC, has found itself in a spot of hot water after it featured a satirical skit showing prominent British journalist Piers Morgan felching the US president, Donald Trump.

The skit ran on the BBC’s gloriously funny show The Mash Report and lampooned an interview Morgan just did with Trump on his Good Morning Britain program.

Morgan has labelled the skit (which you can view in all its glory below) as “homophobic and sexist” and accused the typically PC BBC of “double standards”. Morgan, typically a divisive figure, has also found support among a number of high-profile UK journalists.

Morgan wrote on Twitter: “Amusing though this image may be to many people, can you imagine the BBC broadcasting it if the President was Hillary Clinton or the interviewer was a woman? 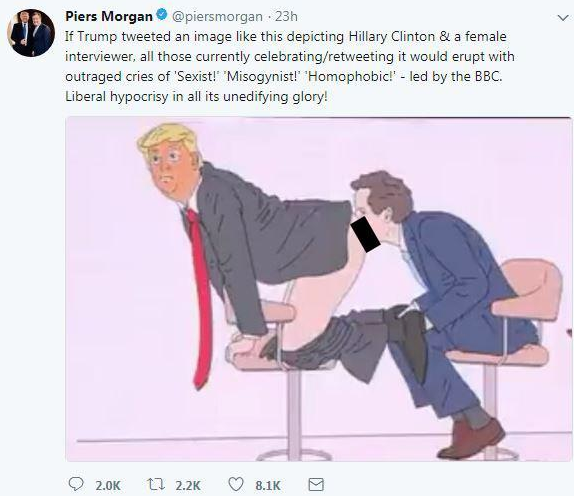 He added: “The BBC thinks this is OK to broadcast. But if it depicted high profile women, there would be outrage. Why the double standard?

“If they did it to Hilary Clinton and Laura Kuenssberg – somebody WOULD be sacked.

“If Trump tweeted an image like this depicting Hillary Clinton & a female interviewer, all those currently celebrating/retweeting it would erupt with outraged cries of “Sexist!” “Misogynist!” “Homophobic!” – led by the BBC.” 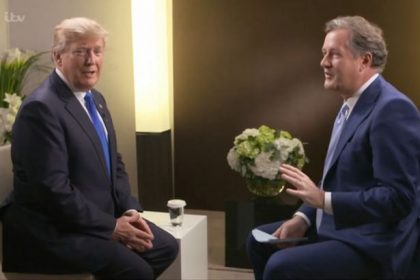 However, a spokesman for the BBC said The Mash Report was a satirical current affairs programme and the skit was part of its “well-known brand of humour”.

In a statement the spokesman said: “The BBC has a rich heritage of satire and The Mash Report takes a satirical and surreal look at the week’s big stories.This brand of humour is well known to BBC Two audiences who tune in to watch the programme.”