Aussies are spending seven minutes more every day listening to audio than last year, with radio staying on top and podcasts overtake owned music for the first time, according to the fourth annual GfK Share of Audio study released today.

Australian radio remains the most popular choice, accounting for 61.3 per cent of daily listening, followed by music streaming on 15.0 per cent.

Podcasts jumped into third place with a 7.3 per cent share of listening (up from 3.8 per cent previously), moving ahead of owned music, which includes CDs and digital purchases, on 7.0 per cent. 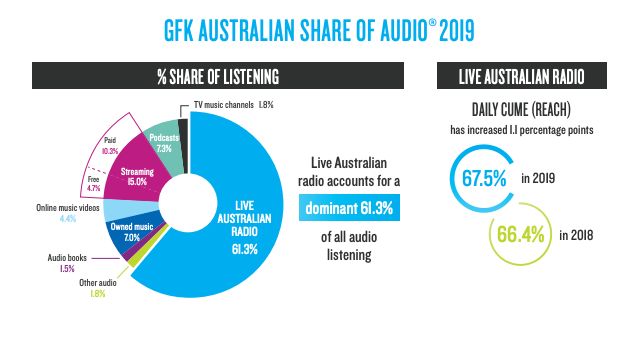 “For the first time in history, consumers are spending more time listening to podcasts than to their own music collections.”

Podcast listeners are most likely to be under 40, managers and professionals, and parents with children under 17.

Time spent listening to podcasts rose to an average of 15 minutes per day from seven minutes a year ago.

Radio continued to perform strongly despite the increase in listening choices, with Australians spending on average 2 hours and 7 minutes per day listening, up 2 minutes from last year and little changed since the first survey in 2016.

Music streaming was also relatively steady at 31 minutes a day compared to 30 minutes a year ago. Within that, ad-free subscription streaming accounted for 21 minutes of daily listening and adsupported services made up nine minutes.

The commercial radio industry has invested significantly in the development of original and radio show podcasts.

Commercial Radio Australia announced today it is working with the wider podcast industry to launch the Australian Podcast Ranker, which will provide regular monthly information on Australia’s 100 most downloaded podcasts.