An anti-abortion billboard ad on a NSW highway has been removed following an online petition from the local community.

The ad, which was erected on the Pacific Highway near Lake Macquarie, was created by pro-life group Emily’s Voice and shows an image of a pregnant woman’s stomach with the words “A heart beats at four weeks.”

An online petition was created by a local community member to have the “offensive” ad pulled.

It is the same ad transport minister Andrew Constance had removed from the side of buses last month. Constance at the time said he was “appalled” by the ads and was investigating how they were approved. 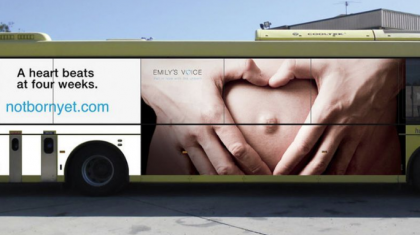 While the billboard is on private property, it drew the ire of locals who were both stunned and angered by the anti-abortion ad.

The ad was placed on a billboard owned by OOH operator oOh! Media. A spokesperson from oOh! told B&T  the ad for Emily’s Voice was reviewed against advertising codes earlier this year and based on the fact it did not breach any of these, was accepted to run. However, upon further review, the ad was deemed to not meet oOh!’s guidelines.

“Upon being made aware of concerns raised with the media placements of this advert by other media outlets, and respecting the fact that it could cause offence to a significant section of the community, the advert was put under the microscope of our review panel which deemed that the advert should be removed as it did not meet with our own guidelines,” said an oOh! spokesperson.

The advertiser has been advised of oOh!’s decision and been refunded its costs.

“The same ad appeared without incident a few years ago on another oOh! site about 200m south of the offending billboard.

“The heart campaign is one of several to have run in the past five years on oOh! billboards in Newcastle, as well as sites administered by other outdoor providers in Tasmania, Queensland and Western Australia.”

In 2018, ACMA criticised Emily’s Voice for a similar TVC ad because it did not clearly identify its political nature.