The Australian Competition and Consumer Commission (ACCC), represented by Norton Rose Fulbright Australia, made the announcement today, which claims Google had breached Australian consumer laws since “at least January 2017” to late 2018.

“We are taking court action against Google because we allege that as a result of these on-screen representations, Google has collected, kept and used highly sensitive and valuable personal information about consumers’ location without them making an informed choice,” ACCC Chair Rod Sims said. 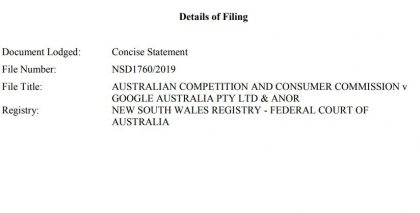 The ACCC’s claims – which are being called a world-first – focus on the collection of location data and the Google Account settings.

With one setting labelled ‘Location History’ and another called ‘Web & App Activity’ both relating to location data collection, the ACCC believes it was misleading for Google not to disclose “that both settings had to be switched off if consumers didn’t want Google to collect, keep and use their location data”.

Furthermore, the watchdog claims that an Android user “would have incorrectly believed, based on Google’s conduct, that ‘Location History’ was the only Google Account setting that affected whether Google collected, kept or used data about their location”.

“Our case is that consumers would have understood as a result of this conduct that by switching off their ‘Location History’ setting, Google would stop collecting their location data, plain and simple,” Sims said.

“We allege that Google misled consumers by staying silent about the fact that another setting also had to be switched off.”

“Many consumers make a conscious decision to turn off settings to stop the collection of their location data, but we allege that Google’s conduct may have prevented consumers from making that choice.”

Additionally, on-screen statements explaining how location data would be used when customers accessed their activity settings were also misleading, claims the ACCC.

writing on the wall?

The announcement comes following the release of the ACCC’s Digital Platforms Inquiry, which recommended a host of reforms to thwart the dominance of both Google and Facebook.

And while the looming legal proceedings have captured the attention of many, they certainly do not come as any surprise.

In fact, the ACCC actually alluded to this exact matter in its report, which was handed down in July.

Under the section titled ‘Ongoing investigations and ACCC under the Competition and Consumer Act’, the watchdog mentioned the matter.

“Whether representations made by Google to some users about the control users have over Google’s collection of location data, raise issues under the ACL,” the report states.

The government has been in consultation with various stakeholders following the release of the report, and is expected to deliver an updated media regulatory framework by year’s end.