When the Queen called all the help to Buckingham Palace yesterday afternoon for an important announcement the world’s media quickly went into a complete tizz.

Early reports said the flag atop the Palace itself was at half-mast and rumours circulated that Her Maj herself had finally popped her royal clogs.

Thankfully, the actual announcement was merely to do with her 95-year-old husband, Prince Philip, retiring from public duty.

Our very own veritable news organ, Nine’s A Current Affair, was first to botch the reporting, with host Tracy Grimshaw last night telling viewers it was the Queen who was officially retiring from public life.

Grimshaw told viewers  she had “confirmation of the significant news” during a live cross with the program’s UK correspondent Michael Best outside Buckingham Palace before wrongly reporting the news.

To be fair to Grimshaw, she was merely reading out what she was being told over an earpiece. However, her error was correctly amended by Best.

However, ACA’s balls-up wasn’t a patch on UK newspaper The Sun who filed a story on its website reporting that Prince Philip had actually died. 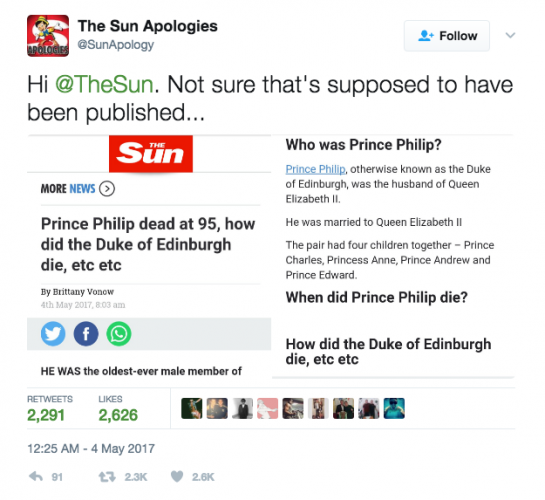 The Rupert Murdoch-owned publication posted a story online with the headline “Prince Philip dead at 95, how did the Duke of Edinburgh die, etc etc.”

“Prince Philip, otherwise known as the Duke of Edinburgh, was the husband of Queen Elizabeth II,” the story read.

The article was quickly deleted soon after, however, it still appeared on Google searches and the publisher soon tweeted out an apology.