Giant bowls filled with business cards often sit atop the registration table at industry events, beckoning attendees to drop their slips of cardboard in, amongst all the many others, to have a chance at winning the lucky door prize.

You find yourself rummaging through your bag, briefcase or pocket only to discover that little rectangular piece of card, with all your details on it, is MIA. No fancy bottle of wine or complimentary dinner for you.

It makes you wonder, in a world gone digital, do we even need the humble business card anymore?

As the digital landscape ensues, the little business card has somewhat held its own. However the functionality of the card, exchanging contact information, is almost rendered superfluous with the virtual ways of connecting through platforms such as LinkedIn, Facebook and various apps.

LinkedIn is a client of public relations agency Edelman, and Edelman’s general manager Matthew Gain says you can find virtually anyone on the platform.

LinkedIn as a platform has removed the need almost to have a contact book or a contact bowl with all the cards on your desk.

However, when it comes to formal situations such as client meetings and pitches, Gain believes there’s a formality associated with distributing the cardboard slips.

“The process of handing out your card, it’s a way to get the meeting underway, for people to recognise who the most senior person in the room is and to then have all the names of the people they’re meeting in front of them,” he says.

“But I don’t know if the business card after that is as useful as it was in the past. Often they come back in piles and stacks on people’s desks afterwards and aren’t necessarily referred to as much and people will often connect on LinkedIn.”

While in Australia there isn’t a firm routine for handing out cards, many Asian countries have a cemented ritual for exchanging the information. At a recent meeting, Alicia Beachley, owner of brand activation agency April5, came across this routine and says that if she hadn’t had her business cards on her at the time, it would have been a “cultural misstep”.

“The expectation is that you trade cards,” she says, outlining the respect the receiver needs to show the card, such as putting it in front of your book or table.

“I’ve had three situations recently where I’ve been dealing with companies who are Asian based… and that’s what made us think ‘oh let’s do a reprint’.”

So while business cards are still used, once someone has exchanged their details they tend to end up in precarious little stacks on our desks.

“Once you’ve got the card it almost becomes redundant,” says Beachley, referencing an app on her phone, CamCard, that reads the card’s info and imports in into her device.

TouchBase is another business card reader app where the receiver taps the card against the phone and it transmits the info across. So while the functional side of the business card has been altered by technology, Designworks’ Wydrowski believes they’re still important in conveying a sense of yourself and your brand.

“While the function has decreased a lot, the symbolic and significance has risen,” she says.

“It’s such a reflection of your business and your personal brand. It does increase your esteem, it’s something your employees buy into. It holds a lot of symbology.

“The craft gives credibility to the message.” 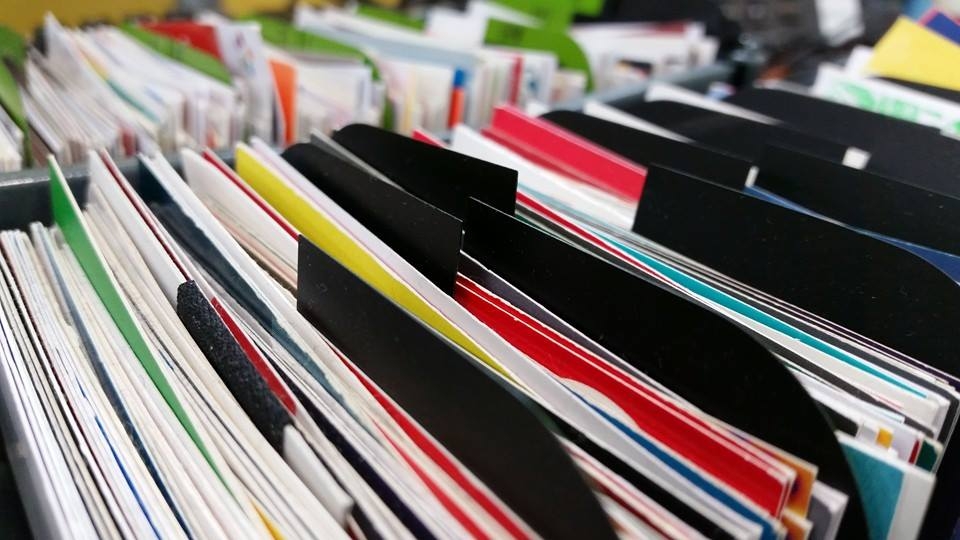 “It’s important for us and our brand that we have members of the team who are dealing with contacts and suppliers that they have a nice representation of the brand in the form of a little piece of cardboard that feels nice in the hand and looks really beautiful,” he says.

What does the future have in store for these little info holders? Perhaps a lifetime in limbo, as Edelman’s Gain says that while he doesn’t really use them anymore, he doesn’t throw them out in case he needs them in the future.

“It’s one of those things, you don’t think you should throw them away because you might need them one day. But very rarely do I find myself going through the stack of business cards I have on my desk to find a phone number.”

April5’s Beachely also faces the same predicament with her stack balancing on her desk. “I don’t know what I’m going to do with them but I don’t want to throw them out.”

Who knows what the future holds, says Designworks’ Wydrowski. “Maybe the next iPhone edition or something will lead to where it’s completely acceptable to touch iPhones and you get a song and dance on it,” she says.