There are approximately 5.3 million Aussie mobile phone owners aged 14 years and over who weren’t born Down Under, and international telco Vodafone is the number one provider among these immigrants, according to a new study by Roy Morgan Research.

The study found that over the six months to November 2016, Vodafone claimed 32 per cent of the mobile market among immigrants overall – and its lead is strongest among the newest arrivals.

Nearly half of immigrants who have lived here for less than two years and brought or bought a mobile phone chose Vodafone as their local provider (47 per cent). Among these newest arrivals since mid-2014, Vodafone is almost twice as popular as Optus (24 per cent), and four times more popular than Telstra (12 per cent).

Vodafone’s advantage declines slightly among immigrants who have lived here for three to five years (46 per cent), according to Roy Morgan, but falls further among those here for six to 10 years (37 per cent) and 11 to 19 years (29 per cent). Up until this time, Vodafone remains the most popular provider ahead of both Optus and Telstra. 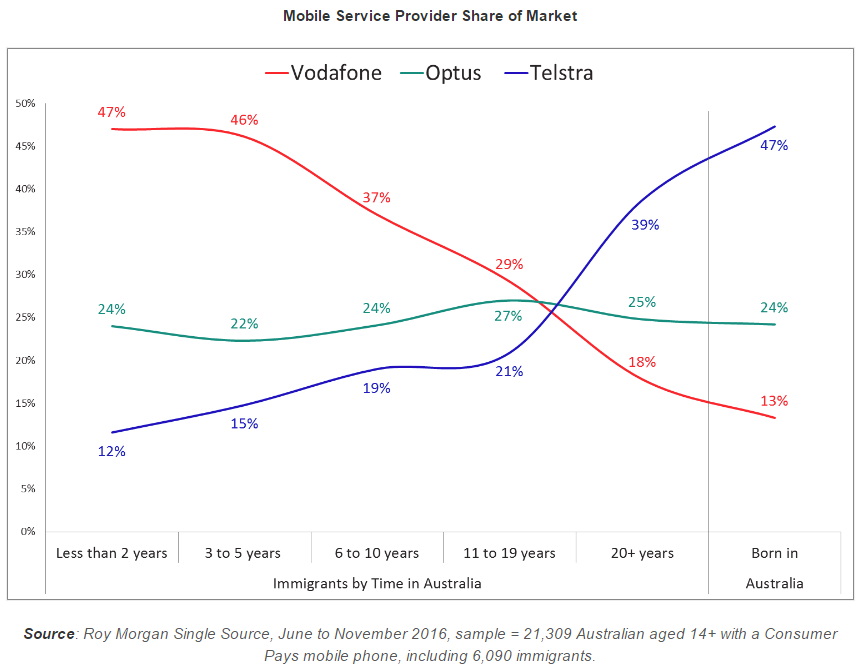 Only among the two million immigrants who have lived here for at least 20 years does Vodafone slip down to third spot for market share (18 per cent). Telstra firmly reclaims the dominant market position (39 per cent), which boosts its overall share of immigrants to 25 per cent.

In comparing the other 70 per cent of Aussies who were born here, 47 per cent are with Telstra, 24 per cent are with Optus and just 13 per cent with Vodafone – almost a mirror of the market share among the most recent immigrants.

Roy Morgan Research CEO Michele Levine said that while it may be the number three mobile provider in Australia, Vodafone is the only local network operator with an international brand.

“New arrivals are unlikely to have ever heard of Telstra or Optus before, but many will know of Vodafone, and some have already been a customer in their home country,” she said.

“Vodafone has 200 million customers in India. Here in Australia, Vodafone is the overwhelming market leader among speakers of Indian languages at home, including Hindi, Punjabi, Tamil and Urdu, as well as less common Malayalam, Gujarati, Telugu and Bengali. Up to 60 per cent of these speakers are with Vodafone.”