Despite Australia’s changing demographics and palette, a new study has found that when it comes to dining out or getting an Uber Eats, traditional fare such as a Mongolian lamb or a Big Mac still tickle our tastebuds.

The survey, by research firm Roy Morgan, found that Chinese food remained the most popular international cuisine eaten by Aussies.

While the study also found our enduring love for McDonald’s, with an average of 6.4 million Australians (32 per cent of the population) visiting a Macca’s over a four week period. That’s up from 29 per cent four years ago.

When it came to international food, 70 per cent of respondents said they liked eating Chinese. Italian was second at 62 per cent and Thai third at 58 per cent.

However, the numbers were swayed by the Boomers and Gen Xs who had a predilection for Chinese, while younger generations preferred Italian and Mexican. 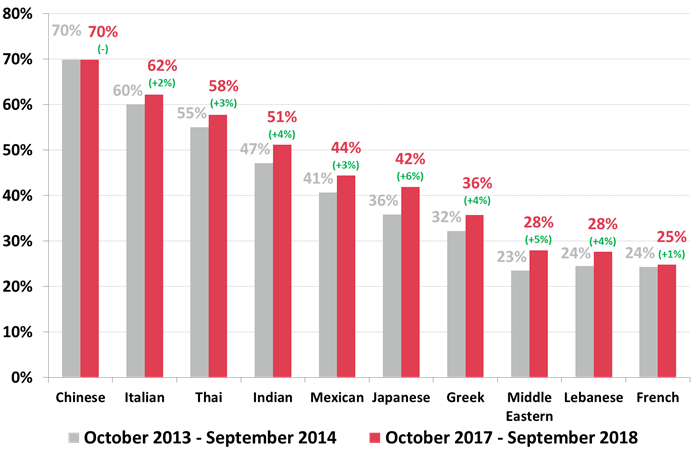 When it came to fast food chains, the study noted that numbers were up primarily from increased patronage by regular hamburger eaters. Over three million Australians (15 per cent of the population) reported visiting quick service restaurants 10 or more times in an average four week period, up from 2.5 million (13 per cent) four years ago.

A big winner over the last four years is pizza outlet Domino’s now visited or used for take away by over 2.8 million Australians (14 per cent) in an average four weeks up from 1.8 million (nine per cent) four years ago. 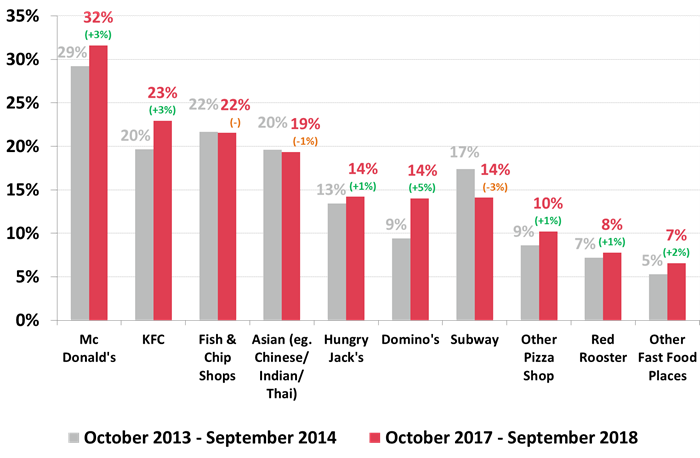 Commenting on the study, Roy Morgan CEO Michele Levine said: “Digging into the extensive Roy Morgan data on Australia’s food and take away preferences shows that while more women (6.1 million) than men (5.8 million) visit a quick service restaurant in an average four weeks it is men that disproportionately constitute the most frequent visitors to fast food restaurants.

“Over 1.7 million men (17 per cent of Australian men) visit quick service restaurants at least 10 times in an average four weeks compared to just under 1.4 million women (13 per cent) of Australian women).