Forget the $150,000 paid to Barnaby Joyce and Vikki Campion for last night’s Sunday Night interview – it appears the real winner out of this could be Joyce’s ex-wife, Natalie, with rumours the networks are now prepared to stump up more than $500,000 to hear her side of the story.

For the bucks it spent and the media exposure it garnered, Seven’s bosses would’ve been disappointed by last night’s viewer numbers.

However, it appears Natalie Joyce will be the network’s next target with reports Seven, Nine and Ten have already offered half-a-million plus to hear her side of things.

Thus far, Natalie Joyce has avoided any interviews following the separation, despite repeated requests from all media outlets.

And proof cheque book journalism if far from dead, Fairfax Media reported over the weekend that Seven weren’t the only broadcaster to splash the cash at Joyce and Campion for their story.

According to the report, Nine’s 60 Minutes offered Campion “an estimated $250,000 to $300,000” to tell her story after she gave birth to Joyce’s child in April, however, the pair had already agreed to appear on Seven’s Sunday Night.

However, a Nine spokesman told B&T the rumour was “completely untrue”.

Meanwhile, the Seven journalist that conducted the interview, Alex Cullen, has been criticised for his soft line of questioning during last night’s hour-long interview. In Cullen’s defence, there were probably strict rules around what he could and couldn’t ask the pair.

Of most concern was the preferential treatment given to Campion while she was employed by the Nationals in Canberra. Check out some of the Tweets below: 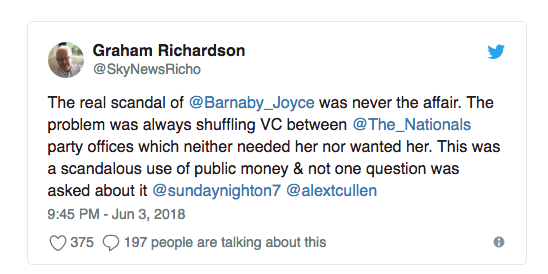 And Joyce’s tell-all last night has not gone down well with this four teenage daughters. The Daily Telegraph is reporting that the children and Joyce’s parents were “appalled” by last night’s interview and still held out hope that he would reconcile with Natalie.

Campion’s line last night that “you can’t help who you fall in love with” proving particularly irksome for the four kids.

“The reported $150,000 payment also caused consternation for the Joyce family, particularly given the pressure, emotional and financial, on Natalie Joyce and their four daughters,” The Tele’s report noted.