Marketing tech firm R3 has released its annual data on global agency new business wins for 2016 with PHD (media) and BBDO (creative) proving to be the year’s standout performers.

R3 collected and individually ranked more than 8,000 new business wins across creative, media and digital agencies globally this year, covering nearly $US3 billion in revenue. “Despite 2015’s numerous headlines dubbing it the year of  ‘Media-palooza,’ we’ve actually seen more overall activity this year across the board,” said Greg Paull, principal and co-founder of R3.

BBDO ended the year in first place amongst terms of revenue among the creative and digital agencies, consistently pursued by sister agency DDB with Ogilvy in third place. “Ogilvy saw most of their wins from new business come in the first half of 2016 with big wins from Motorola and GSK,” said Paull, “but their big Vodafone win helped them close the gap in the final month.” BBDO extended its VW relationship in Brazil in December, helping it stay in a leadership position.” 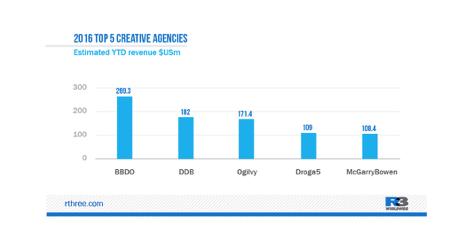 PHD on top for media agencies

The second half of 2016 saw a huge surge in the number of media accounts changing hands in the midst of somewhat of a transparency crisis in the industry.

R3 reviewed more than 3,400 wins from 80 different media agencies to build a comparative performance of new business analysis, with more than 2,000 of those wins coming in the second half. PHD’s VW win and 185 others allowed it to finish the year in first place in terms of revenue, closely followed by Omnicom’s Hearts and Science. Starcom moved up significantly off the back of the global Fiat Chrysler and Mars wins to finish the year in the top 10.

This year, R3 rolled up more than 8,000 wins across 400+ agencies globally. Not surprisingly, Omnicom dominated the overall results, adding a staggering 6.5 per cent to their overall revenue through this year’s new business development, almost $US1 billion. WPP was relegated to second place, with both Dentsu and MDC return the next best results as a percent of their 2016 revenue base. 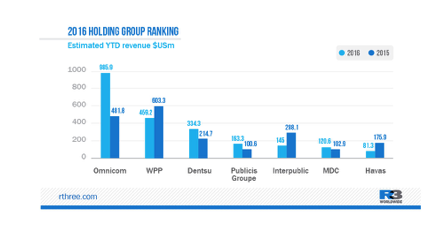 In June 2016 new business tracking, R3 reported that the number of media wins was down 6per cent from H1 of 2015, while creative wins were up 30 per cent over the previous year – a phenomenon that was dubbed “Roster-Palooza.” It seemed likely marketers would be more active in reviewing and adding to their creative agency rosters throughout the remainder of  2016 – and while they did track roughly 300 more creative wins than in H2 of 2015, there was actually a bigger percent increase for media agencies, who won 16.6 per cent more business in 2016 than in the previous year. 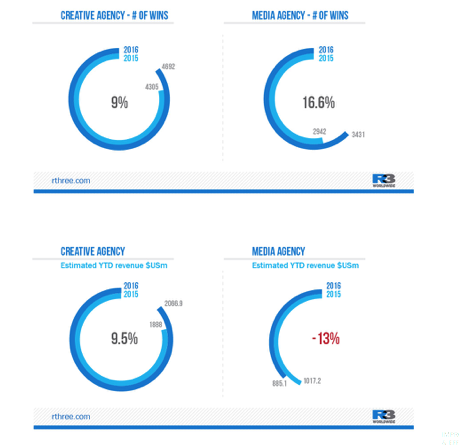 “Rather than becoming the year of ‘Roster-palooza,’ 2016 could really be called ‘Media-Palooza,’ Part 2,” said Paull. “The second half of the year saw big spenders like AT&T, Fiat Chrysler and 21st Century Fox making decisions about their agency partners, but it is interesting to note that while the number of media wins for the year is up, revenue is actually down 13per cent from last year,” he added