The second annual Taboola Football Media Cup was a great success, with a competitive atmosphere leading agency OMG to victory.

The 2019 event, held at Alexandria’s All Sorts Indoor Sports Centre, was attended by five agencies – OMG, Performics, Columbus, Ikon Communications and IPG – as well as a team from Taboola who all donned different coloured jerseys to contest the cup.

Two groups of three teams battled it out on the field, with the top two teams from each group then playing off in a semi-final.

OMG (team pictured below) took out the coveted first-place trophy after successfully winning four games, including the final round. The media agency’s Matthew Wallace was also named player of the tournament. 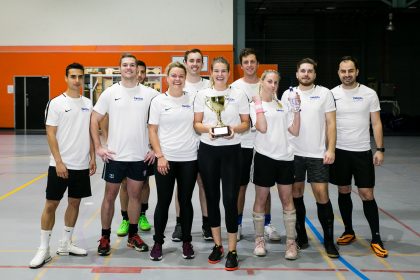 This year’s event promised to be bigger, hosting a DJ and photographer, winner’s trophy and a post-event drinks celebration at the Rocks Brewing Co.

Taboola Football Media Cup spokesperson Dylan Robinson said the day had been well-received by all the players.

Robinson said: “We got a lot of positive feedback from our partners for creating a unique, memorable and hotly contested event.

“We hope OMG are now proudly displaying the winner’s trophy in their office.”

The Taboola Football Media Cup will now travel to Melbourne for its inaugural round in October.