Yesterday, B&T brought you Roy Morgan research into the likes and peculiarities of the fans of the two competing AFL teams in tomorrow’s grand final – the Swans and Bulldogs.

According to the research, based on their respective supporter bases, the Storm are the second most popular team in the NRL (behind the Broncos). Some 15.1 per cent of all NRL fans support the Storm, which is four-times the support of the Sharks on 3.7 per cent. 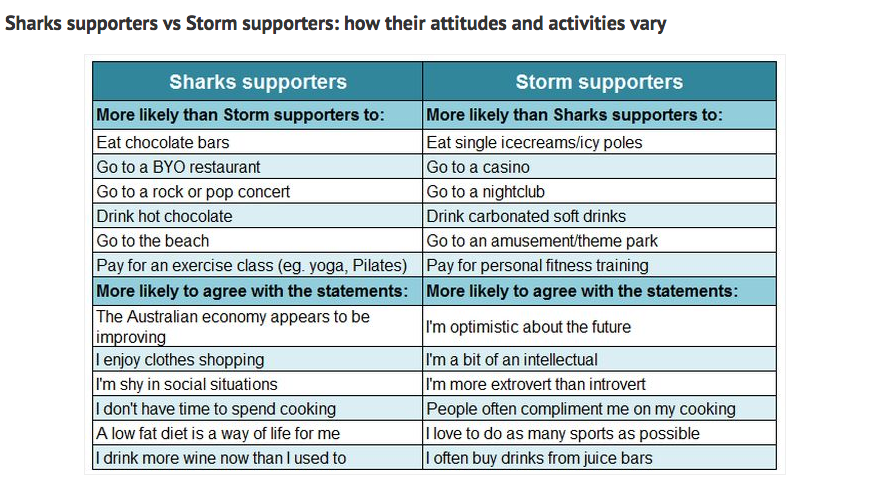 Commenting on the study, Roy Morgan’s industry communications director, Norman Morris, said: “With Melbourne Storm and the Cronulla Sharks gearing up to contest the NRL Grand Final this Sunday, Roy Morgan Research brings you a head-to-head comparison of each team’s supporters. This year’s final is shaping up to be a hard-fought match, with the Sharks determined to finally clinch their first title and the Storm set on making it Premiership number three. So which supporters will be shouting loudest this weekend?

“Our results show that Sharks fans are more likely to be financial members of their club, indicating an elevated level of commitment. They are also more likely to attend NRL matches, suggesting that there will be more of them present at Sunday’s big showdown (the fact that it’s in their hometown helps, of course).

“Should the Sharks win, there is no doubt that their supporters will celebrate heartily: not only are they more likely than Storm fans to agree that they ‘drink more wine now than I used to’, they’re also far more likely to drink more premium beer than they used to, to like their alcoholic beverages strong, and to try any new drinks they hear about.

“On the other hand, if Melbourne Storm win, their supporters are more likely than their Sharks counterparts to hit a nightclub or casino to celebrate. Any lingering after-effects of their revelry will probably be tackled the next day with a personal training session and a healthy fresh juice,” Morris said.