When Homer Hudson ice cream was launched into the Neapolitan-loving Australian market place in the late 80s, it shook up the whole industry. In 2015 the ice cream icon is set to do it again with a unique range of new flavours, and new ownership.

“We have a simple plan,” said one of the new Homer Hudson owners and company creative director, Justin Drape. “We find out what people want. Then give them double. It’s about providing a decadent ice cream experience and going all in.”

Drape is joined by Mark Green, Scott Nowell, Fabio Buresti and David Park as partners behind Homer Hudson ice cream. Those names might also be familiar through their innovative work with two other companies – The Monkeys and Maud. 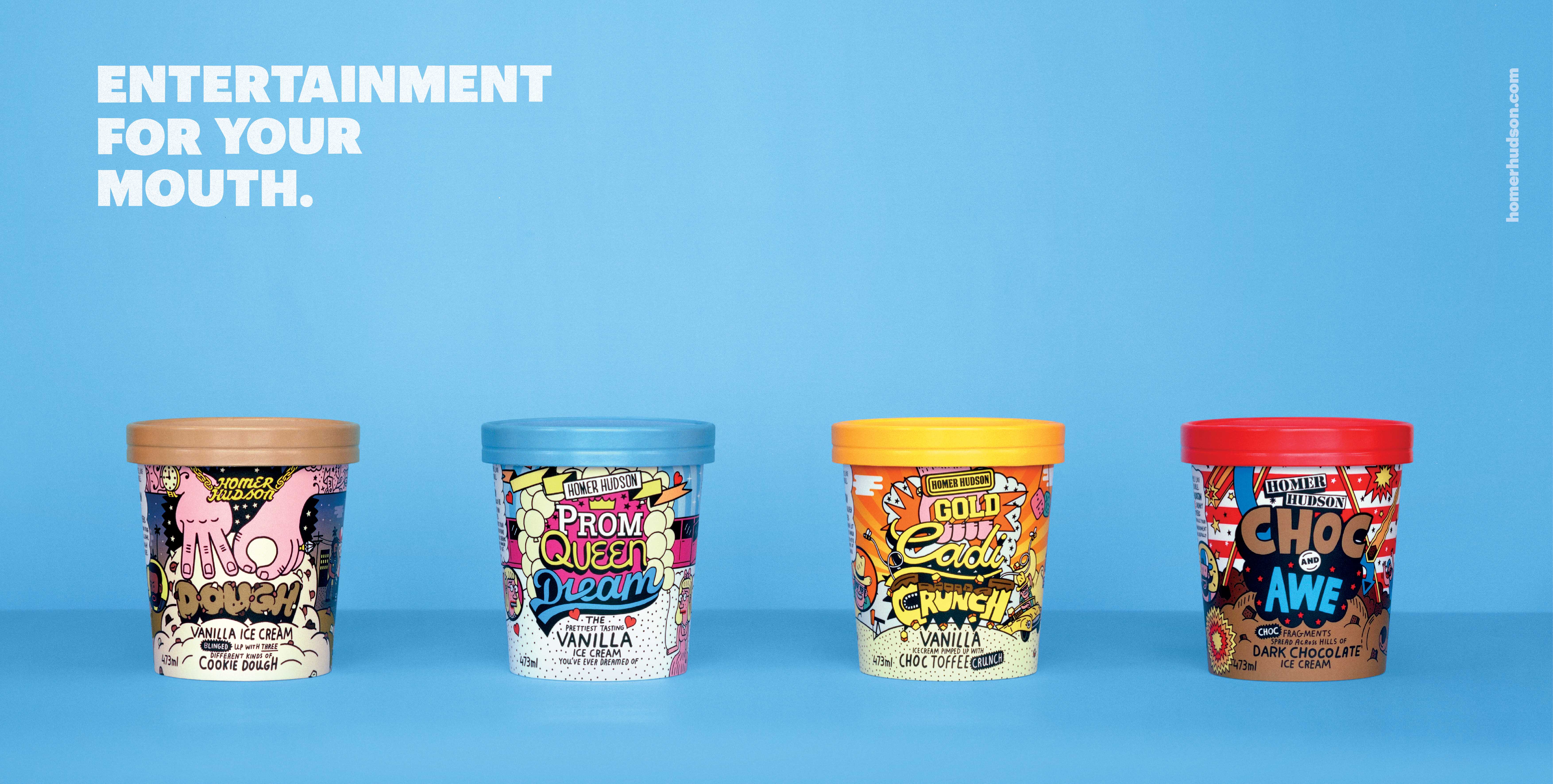 The Monkeys is one of Australia’s most successful and awarded independent advertising agencies, and Maud is highly respected around Australia as a leading design company.

“Owning Homer Hudson means we get to reinvent an iconic and well loved brand, developing everything from the ice cream recipes to the tub design and all forms of communication,” said Drape. “We also get to create interesting collaborations.”

The first of which is the limited edition art on every tub conceived by renowned British artist, Serge Seidlitz who bought each flavour name to life with a colourful pop culture diorama.

“We want every tub to tell a story that people enjoy as much as the ice cream,” Drape said, “and we are currently developing a platform that will allow consumers to interact with the characters on each tub and enjoy one part of a larger narrative.”

Aside from the artwork, everything else for Homer Hudson has been created in-house at The Monkeys and Maud including design, illustration, packaging, consumer website, B2B trade website and distribution and e-commerce systems, posters, POS and continued NPD.

With The Monkeys expanding into FMCG product development and ownership, the agency has essentially become its own client.

“True,” Drape concurred. “We thought about appointing a procurement company to put the Homer Hudson account out to pitch but then we had a chemistry session with our own agency and everything just clicked.”

On a more serious note Drape admitted, “It has given us a deeper understanding of what our clients go through. Because most weeks we’re now dealing with dessert chefs, licensees, suppliers and retailers. There’s a lot to learn, but there’s also a lot of opportunity to introduce fresh thinking into a traditional process, and a traditionally lacklustre category.”

So what happens when some of the finest advertising minds in the country get their hands on the wheel of an iconic ice cream brand?

“This move is designed to open up new revenue and commercial opportunities for The Monkeys and Maud.” said Mark Green, The Monkeys CEO. “If we can pull this off we can partner other clients in new ventures and actually contribute with skin in the game. We might be wrong but whilst the industry cries about falling margins little is being done to move upstream and offer clients something different.”

When the first Homer Hudson was launched in the 80s, its advertising was a hit. The lo-fi TV ads, with their “Dragnet” style voice over, promised ice cream honesty and big chunks. “Hi Homer” became something of a conversational catchphrase.

As Homer Hudson is relaunched around the country, The Monkeys have planned a social marketing campaign that will put Homer Hudson back into the hearts and minds of every ice cream lover in the country.

Obviously, the ice cream isn’t being made in The Monkeys’ busy Redfern agency in New South Wales. Instead, Bulla Dairy of Melbourne has been brought on board to turn the ice cream vision into reality.

“We like that Bulla is Australian owned and run, that it’s hugely successful in a very competitive market and that they’re supportive and excited about what we’re doing,” Green said. “They also embrace the Homer Hudson philosophy and are willing to try things that have never been done in this category before.”