Paramount Pictures Australia is promoting the upcoming release of Al Gore’s An Inconvenient Sequel: Truth to Power with an out-of-home campaign, managed by MEC Australia, depicting how global warming is significantly impacting the Great Barrier Reef.

Spearheading the campaign is a special build across Adshel’s Immerse site on Flinders Street in Melbourne, which features a double-sided diorama of a reef undergoing coral bleaching, illustrating the gradual destruction of coral as global warming continues unabated.

It includes a styrene rock formation with 3D-printed coloured and bleached coral and an LED ripple projection that creates an underwater effect. 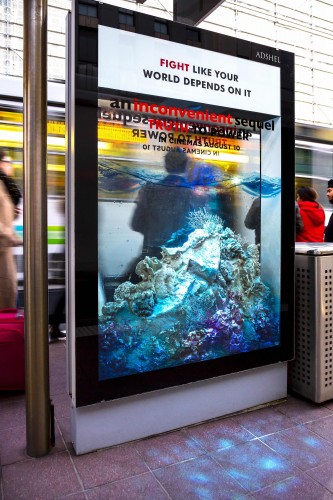 The campaign went live on Monday, and is supported by a national Adshel Live and Adshel Rail campaign and a digital media component.

Sarah Hunter, group business director at MEC, said: “We love working with innovative clients at MEC, and Paramount Pictures is definitely one of those.

“Outdoor remains a fantastic channel for high-impact, relevant and dynamic executions, and Adshel Immerse was the perfect way to communicate how the effects of climate change – addressed in the film – are affecting us in our very own backyard.

“We’re very pleased with the result so far.”

David Roddick, sales and marketing director at Adshel, said: “We enjoyed working with MEC and Paramount Pictures to create this striking and thought-provoking execution.

“Our Immerse team are consistently developing world-leading innovation to ensure maximum impact and talkability. This campaign also aligns with Adshel’s community focused approach, looking to reduce our footprint on the environment.”

The film opens in cinemas on Thursday 10 August.