Aussies’ love of SVOD player Netflix appears unabated with new research showing 36 per cent of us now access the service.

And rather than showing any signs of slowing, subscription sign-ups have surged in 2017.

A study by Roy Morgan Research found that in the first three months of this year some 7,901,000 million Australians had Netflix, up sharply from 5,862,000 (29 per cent) in the previous quarter.

This latest surge in Netflix’s potential audience is the result of a 20 per cent jump in the number of household subscriptions since the end of 2016. An estimated 2,714,000 Australian homes (29 per cent) are now subscribed.

Netflix has also recently announced plans that it would spend more than $A8 billion on new content. The mooted new shows include: Orange Is the New Black (Season five), Glow, Castlevania, Friends From College, Marvel’s The Defenders and Mindhunter. You can check out the list of the new shows here.

The news follows on from Foxtel’s relaunch on Tuesday where the pay TV provider unveiled packages as low as $10 per month and a $900 million investment in content.

Netflix’s $8 billion is worth more than the total valuation of Foxtel. However, Foxtel still has bragging rights over the most numbers of subscribers, but only just. Foxtel’s 2.8 million households just edging Netflix with 2.7 million.

However, it needs to be said that Foxtel’s investment is in local content, while Netflix has only one Australian-made production in the pipeline, a 10-part drama series rumoured to be called Tidelands and shot in a Queensland fishing village. 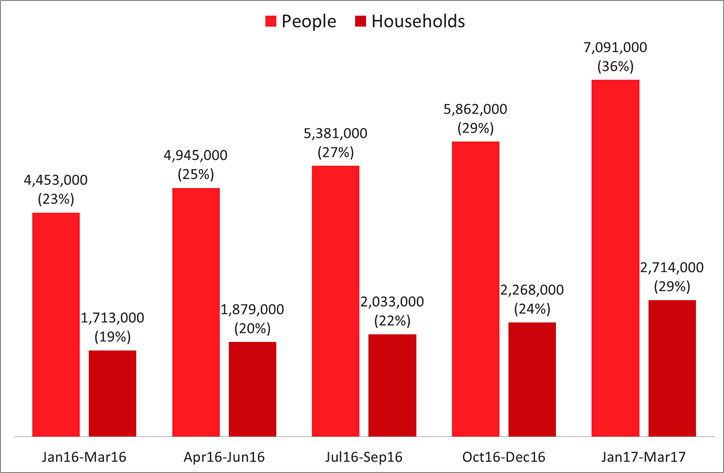 Commenting on the study, Roy Morgan CEO Michele Levine said: “The number of Australians with a Netflix subscription in the home grew steadily by just under 500,000 per quarter throughout 2016. In just the first three months of 2017, the SVOD powerhouse gained over 1.2 million new viewers via 446,000 additional household subscriptions.

“Clearly Netflix – and SVOD more generally – show no signs of slowing. Roy Morgan has been measuring Netflix in Australia since its beginning in early 2015. What we have seen is a classic case of rapid technological adoption, with early adopters signing up first, professional technology mainstream following close behind, and a continuation of high growth as younger digital natives, older tech explorers, traditionalists and even technophobes begin to discover the services,” Levine said.