Twitter’s vice-president of data strategy has said there is much to be learned for brands from the similarities between the power in lightning strikes and solar energy and the efficacy of communications strategies.

Chris Moody, who was speaking at the Cannes Lions Festival in France, said there was a temptation to try and chase the enormous and sudden power of lightning like events on Twitter such as the Super Bowl or any time Kim Kardashian gets her kit off; when, in fact, there are far more predictable, stable and equally strong opportunities offered by every day opportunities. 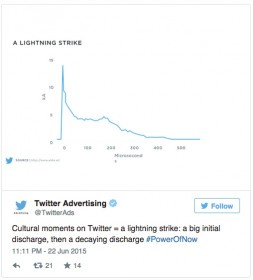 “While many brands successfully engage their Twitter audiences during ‘lightning strike’ moments, some are missing out on an equally valuable opportunity: connecting with users during the ebb and flow of their daily lives. And users are eager for this brand interaction,” he said. 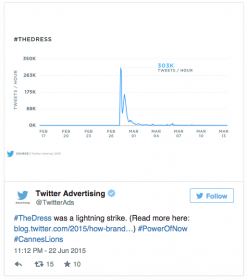 In fact, while brands may often feel glum their commercials only attract the attention of a miniscule fraction of their intended audience, brands too are ignoring customers trying to engage with them, said Moody. 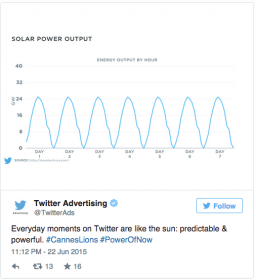 “As few as two per cent of all tweets about a brand are ever responded to by the brand mentioned,” said Moody. 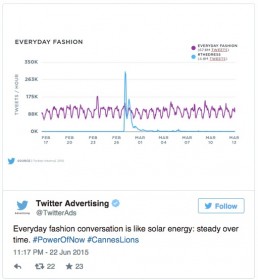 Moody underscored the point that the volume and predictability of everyday moments make them a key time for advertisers to connect with consumers using the graph below. It shows how the overall volume of brand mentions tweeted dwarfs a jump in brand mentions on Twitter produced by a Super Bowl ad every day.