Over a year ago, Daniel Cabrera, a homeless 9-year old boy, was photographed doing his homework by the light of a McDonald’s store in the Philippines. Joyce Torrefranca, a Medical Technology student, took that photo after taking a break from a night of studying.

She was touched and inspired when she chanced upon the boy and uploaded the photo on her Facebook page. Soon, her post became viral. Financial aid and other donations from all over the world poured in for the boy. And his life took a turn for the better.

The new film by Leo Burnett Manila and Filmex Production recollects that fateful night through Joyce. It also retells the dire straits Daniel’s family was in and his perseverence to finish schooling so he can become a policeman, as told by his mother. A poignant reunion between Daniel and Joyce ensues over a simple meal.

In a Catholic country which celebrates Christmas the longest (and has a deluge of Christmas ads), the film resonates loudly, even without the Yuletide trappings, for its timely message of love and compassion. Inspired parents, teachers and students have also responded positively for its affirmation of the value of education.

After just three days since its release, the film is rapidly gaining views with almost 2.5M views and 121K likes on McDonald’s Philippines Facebook page and almost 2M views on YouTube. 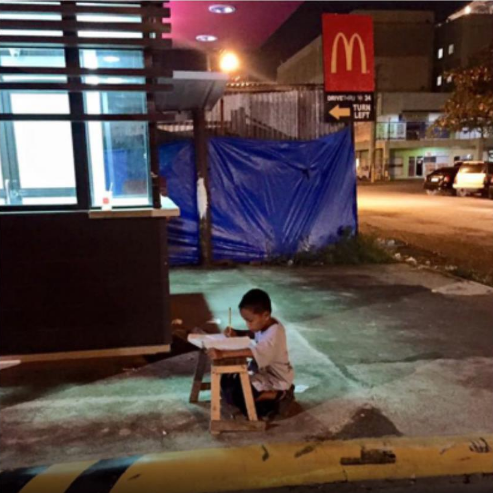 The photo by Joyce Torrefranca that went viral.