Two of IE’s team members will be on the ground with the Street View Trekker, using it to take panoramic photos as they walk through Melbourne’s best and greatest cultural, social and aesthetic locations.

The Street View Trekker is Google’s newest Street View camera platform, a wearable backpack with a camera system on top. There are 15 lenses at the top of the mast, each pointed in a different direction to create a 360-degree panoramic view. 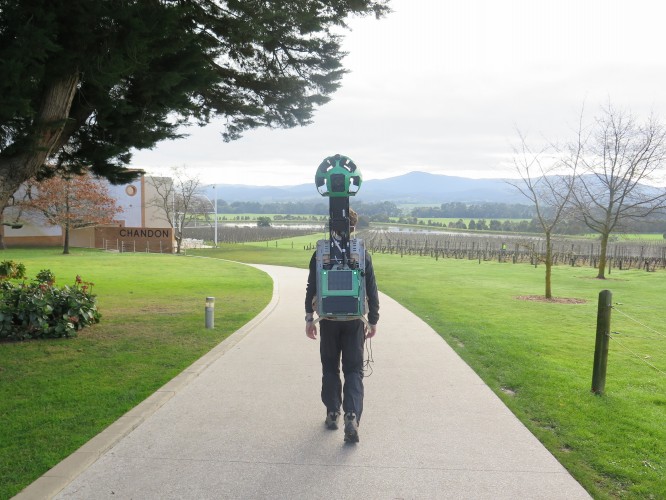 IE’s operators will map famous Victorian destinations such as: The Great Ocean Road, Hanging Rock and The Royal Botanical Gardens.

The imagery will be stitched into panoramic digital renderings of these walks and then published on Google Maps – allowing tourists around the world to take a virtual trip to Victoria online and better plan their trip.

Street View Trekker is designed to capture imagery in remote places or places only accessible by foot, giving users the option to view ski-slopes, rocky-mountains and parks. By collecting the images with the Street View Trekker, Google plans to create beautiful panoramic tours that users can easily navigate through in the same way you’d navigate down a normal road on Google Maps.

Street View Trekker has already captured the renowned locations of The Grand Canyon, Venice, Mt Fuji, Galapagos Islands and the temples of Angkor. Australia is soon to be amongst these landmarks, with the help of Tourism Victoria and IE Agency.

The Victorian Minister said of the opportunity, “The Victorian Government, is pleased to use the Street View Trekker technology to capture 360 degree panoramas of some of Melbourne’s most visited attractions, including Federation Square, the Melbourne Cricket Ground, the Great Ocean Road and the Yarra Valley,” Ms Asher said.

“This latest project through Tourism Victoria, follows the success of stage two of the innovative Play Melbourne campaign, which featured ‘Remote Control Tourists’ equipped with wearable cameras and microphones who were directed to explore the city by prospective visitors via a purpose-built website,” Ms Asher said.

Megan Boundey, product manager for Google Maps, Australia and New Zealand said: “Whether you’re planning your next adventure along The Great Ocean Road or simply a digital explorer relaxing on your own couch, you’ll soon be able to take a virtual trip to some of Victoria’s most iconic landmarks on Google Maps. By loaning Street View Trekker to organisations like Tourism Victoria, we are able to capture even more of our beautiful country and share Australia’s diverse landscapes with the world.”

IE Agency’s managing partner, Berry Driessen said of the partnership: “Not only are we lucky enough to work with Melbourne’s leading tourism agency, we’re now also working with the world’s leading technology company. Through mapping these prestigious and incredible places, tourists will be able to easily view Victoria’s iconic places from the comfort of their living rooms once the imagery goes live on Google Maps”

Driessen added: “Tourists will soon be able to better plan their trips with 360-degree visual representations of touristic locations. Having the technology encased in a backpack has enabled never before mapped places to be captured.”