A new marriage equality campaign headed by Airbnb and backed by some of Australia’s corporate heavyweights has launched that encourages people to wear a specially designed “acceptance ring” until same-sex marriage is legalised.

The campaign’s creative is by Clemenger Melbourne and has the backing of companies such as Fairfax Media, Foxtel and Qantas. It is known as the “Until We Belong” campaign has been billed as the “most public declaration for marriage equality” so far.

The campaign calls on Australians to don the ring designed by famed Aussie creative Mark Newson.

According to Newson the matte black metal ring is represents the gap in marriage equality and comes engraved with the words ‘Until We All Belong’ on the interior. 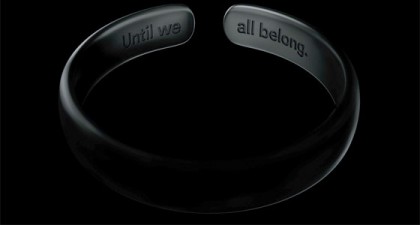 Commenting on the campaign, Airbnb’s Australian CEO, Brian Chesky, said: “Openness and belonging are at the heart of Airbnb – it’s at the core of what we do every day. We are committed to helping people belong no matter where they are in the world and strongly believe that everyone should have the right to marry the person they love.”

In a show of support from the advertising industry, production company Revolver/Will O’Rourke, director Jonathan Kneebone/ The Glue Society and photographer Derek Henderson rallied behind ‘Until we all Belong’ and shot the film and stills for the campaign in partnership with Airbnb and Clemenger BBDO.