In this guest post, Amy Wilson and Nick Danenberg, senior marketing scientists at Adelaide’s Ehrenberg-Bass Institute, take a look at Australian public health campaigns to find out what flies and what flops…

Done well, public health campaigns can encourage healthier behaviours and reduce the growing burden that health is putting on the pockets of individuals and the government. Done badly, they waste a lot of money with no benefit. We need to look to evidence-based advertising research for some clear guidelines to making campaigns more effective.

How does advertising work?

In the commercial world advertising largely works by increasing a brand’s Mental Availability – the chance of the brand being thought of or noticed in buying situations (Romaniuk and Sharp 2004).

Commercial marketers use campaigns to build mental availability for their brands by informing potential buyers that a brand exists, and then regularly reminding them. It works the same way for public health campaigns, however rather than increasing mental availability for a brand, the aim is to remind the target audience (often the entire general public) about a beneficial behavioural change (e.g. being sun smart or consuming more fruit and vegetables).

In general, the public health discipline is centred around behaviour change theories that focus on the role of information to educate consumers and affect a change in behaviour. As such, public health campaigns have overly relied on information and persuasion, an approach which has been supplanted by the evidence-based approach to advertising which seeks to remind, reinforce and nudge behaviours consistently over time.

Some rules for building Mental Availability

The Ehrenberg-Bass Institute’s research into advertising effectiveness provides some evidence-based insights for building mental availability that can be applied to public health campaigns. While there are many aspects to consider, including media choice, scheduling and reach, this article focuses on some of the creative aspects of advertising.

Distinctive Assets ensure that campaigns look unique, help the ad’s message to stand out and, when used over time, create a mental link between a number of stand-alone campaigns. This ensures that they are seen as a single, cohesive, ongoing initiative which improves mental availability and the likelihood of behaviour change over time.

Distinctive Assets also help to make sure that ads look different from the competition. This is crucial, as if an ad looks like it is for another brand (or is somewhat ambiguous), it can affect sales. The same holds for campaigns that promote behaviour change. If they look like one another, people may  become confused about the health message being communicated to them. Campaigns need to stand out and cut through visual clutter so that it is easy for the public to recognise the campaign and the behaviour change it is promoting.

By campaigns we mean a single campaign which runs for a few weeks to a couple of years (e.g. ‘Go for 2 & 5’) and which may or may not be part of a broader public health initiative (e.g. to promote healthier diets).

Examples of distinctive assets that have been used in public health campaigns in Australia include: 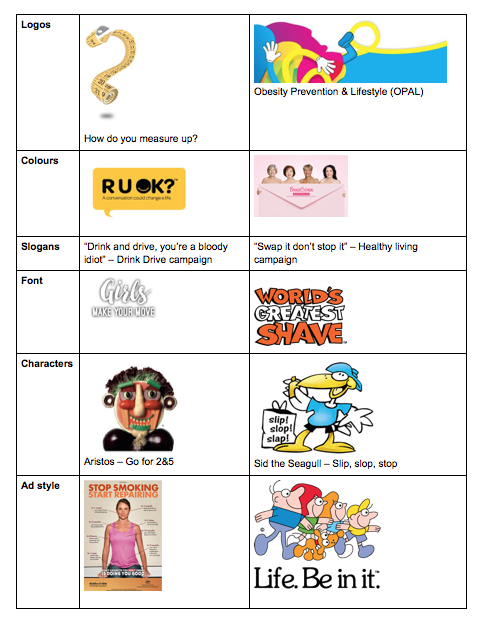 NB: to increase the chance of your campaign reaching more people, we recommend using more than one type of media.

Who does it well?

It is easy to think of brands that do a great job of being distinctive, consistent, engaging and relevant, such as Coca-Cola, Cadbury, McDonald’s. However, finding good examples of public health campaigns is more challenging. Most campaigns in the public health space have, unfortunately, fallen short on at least one of the rules.

One exception is the Cancer Council’s ‘Slip Slop Slap’ campaign which launched in 1981. Sid the seagull has informed and reminded Australians to ‘Slip, Slop, Slap’ for over 30 years. Aside from the addition of ‘Seek and Slide’ in 2007, Sid the Seagull, the simple, catchy reminder to ‘Slip, Slop, Slap’ and the general look of the campaign have been consistent. Sid has also demonstrated being sun smart across various outdoor activities. Each new campaign has built on the previous one and The Cancer Council has developed strong distinctive assets and built mental availability. Importantly, the campaign has contributed to the prevention of skin cancer.

Campaigns such as ‘Be Active’, ‘Swap It Don’t Stop It’, ‘How Do You Measure Up’ and ‘Go For 2&5’ all aim to encourage Australians to adopt a healthier diet. However each of these relatively short campaigns (each on-air for less than a year) used different distinctive assets and messaging. By creating entirely new creative for each campaign the advertisers missed the opportunity to build mental availability which diminishes the likelihood of a sustained influence on behaviour. Plus, developing new creative for each new campaign is very costly.

As marketers interested in promoting health and wellbeing, we hope that our insights about advertising effectiveness can help public health campaigns achieve their goals. We encourage people working in public health promotion to use an evidence-based approach (see Romaniuk, 2018) to executing their campaigns so they get better value for money on their marketing spend and have a greater influence on behaviour change.