Based on the insight that men want to support women with breast cancer #BrotherforSisters is a week long campaign encouraging Australians to raise money for much needed research by purchasing a pink tie from the Brother Facebook page.

To promote the campaign, Brother developed three pink ‘Tie-Tap’ ties that allow passers-by around the streets of Sydney to quickly tap their credit cards for an automatic $10 donation. The pink Tie-Tap ties have been fitted with a Near Field Communication technology chip that’s connected to a smartphone and programmed to accept the payment and forward it directly to the National Breast Cancer Foundation. 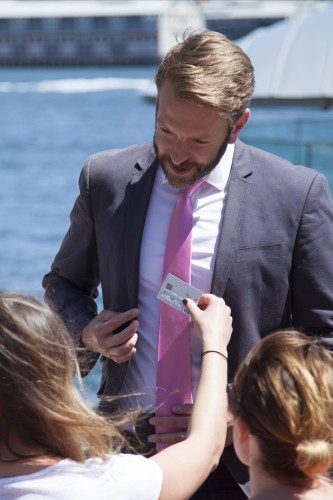 “We have selected this charity as it holds importance to many of the women that work at Brother. Brothers and men are stakeholders in the journey travelled by many women living with breast cancer. This campaign demonstrates that males play an important role in supporting their loved ones during this illness.”

Paul Swann, Creative Partner at The Works added: “This is a great example of how new technology can take a traditional method of fundraising to the next level, making it simpler than ever before. It is great to see Brother throwing its support behind a fantastic cause.”