President-elect Donald Trump has held his first press conference since July 2016 at Trump Tower in New York. The event wasn’t without some drama – Trump attacked media publications CNN and BuzzFeed.

Trump called BuzzFeed a “leftwing blog” and a “failing pile of garbage” for publishing the unverified report which claimed (among other things) that Trump has deep ties with Russia. The opening paragraph of the BuzzFeed article states: “A dossier, compiled by a person who has claimed to be a former British intelligence official, alleges Russia has compromising information on Trump. The allegations are unverified, and the report contains errors”.

Responding to the article at the press conference, Trump said: “I think it’s a disgrace that information that was false and fake and never happened got released to the public. As far as BuzzFeed, which is a failing pile of garbage, writing it, I think they’re going to suffer the consequences.”

Suffer the consequences they have; withing five hours BuzzFeed released a bunch of limited-edition merchandise including t-shirts, stickers and an actual garbage can with the quote “a failing pile of garbage”.

All proceeds from purchases of BuzzFeed’s “Failing Pile of Garbage” merchandise will go to the Committee to Protect Journalists. 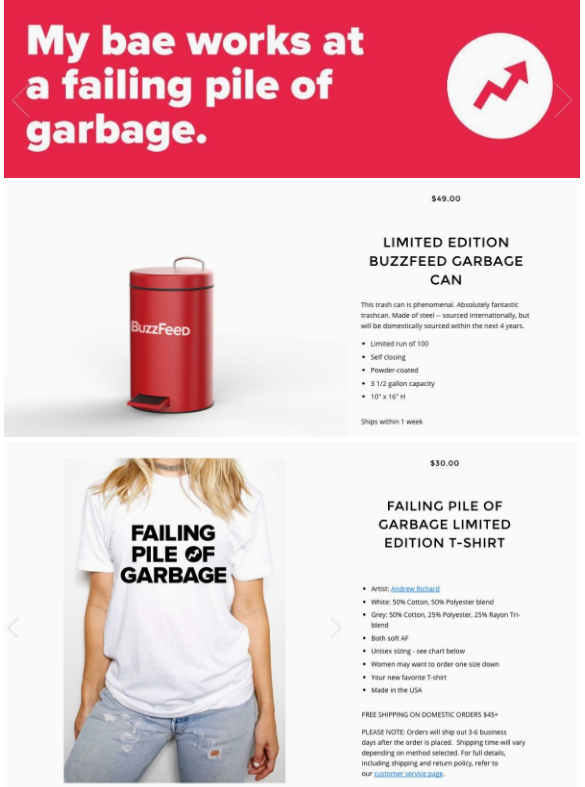 BuzzFeed employees from across the globe have been tweeting about Trump’s description:

That’s MISTER failing pile of garbage to you

get your ‘failing pile of garbage’ swag rn ? ?https://t.co/5JBXS4moKS pic.twitter.com/j0m2RrjSpx

Well that’s quite an ominous strapline on BBC News. pic.twitter.com/k2ML0E4T1e

Woke up at 03:00am to watch presser. Went back to bed hoping it was a bad dream. Ah, nope… ? pic.twitter.com/AYpkFwMAGH

He also referred to CNN as “fake news” because it broke the story that both President Obama and Trump had been briefed on allegations that Russia has “compromising personal and financial information” about Trump.

“Since you’re attacking us, can you give us a question?” CNN’s senior White House correspondent Jim Acosta asked during the conference. Trump replied, “Not you, not you, your organization is terrible.

“I am not going to give you a question. You are fake news.” Watch the exchange below:

Acosta later said that incoming White House Press Secretary Sean Spicer threatened to have him removed from the press conference if he tried to ask another question.

CNN reporter Jim @Acosta says @seanspicer, who’ll be Trump’s press secretary, told him he’d be thrown out if he tried again to get Qs in

CNN’s Jim @Acosta said on the air that Trump’s team threatened to yank him from press conference if he tried to speak up again.