In this guest post, Phil Barker (pictured below), creative director at Sydney content building firm The Artistry, says he may be at the top of his agency prowess but, strangely, still finds he’s doing every frickin’ thing…

If you have a job at a big corporation or agency, you can go into work every day comfy in the knowledge that the only tasks you’ll have to execute all day align with your skills set … you’ll only have to do stuff you’re good at. 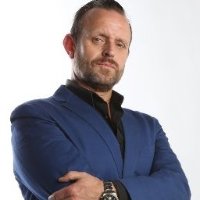 Your job is like a favourite old pair of undies, comfortable, familiar but, ultimately, wearing a little thin.

For those of us who have made the insane leap into the testing flames of launching our own businesses and brands, however, we often have to wear new and very uncomfortable undies every day.

I have been a journo, magazine editor, publisher and magazine executive in corporate life. While I may have been required to appear wise on the editorial, sales, and marketing of a variety of products from Live to Ride to Vogue Australia, I was never called upon to stack a five tone truck with 400 Tolix chairs by myself and get it to somewhere by 5pm or everyone will be standing at dinner.

Never once was I required to figure our how I was going to get a 120kg a/v case out from behind a false wall after some idiot (me) built it in, with no door. I would never have had to destroy that wall with a hammer two weeks later, because it’s cheaper than demo guys. I would have ruined my nice suit.

I am the creative director and partner in an agency, The Artistry, specialising in consulting with brands to tell their story with content – events and activations. This year we’re creatively producing Vogue American Express Fashions Night Out in Sydney and Melbourne, that kind of thing.

Owning an SME is mad difficult and frustrating and sometimes soul-destroying but has also been the most fun, rewarding and engaging experience of my professional life.

To say I am more of a right-brain person is an understatement. I don’t have any left brain at all. I put my keys down and wander away from them once a week. Detail actually physically pains me, as it does so many of us Piscean blue-sky fliers. And, as a former publishing executive, I spent years with an EA so ruthlessly efficient I actually ceased to carry money, like the Queen, I am ashamed to admit. I write stuff. I don’t fix stuff. 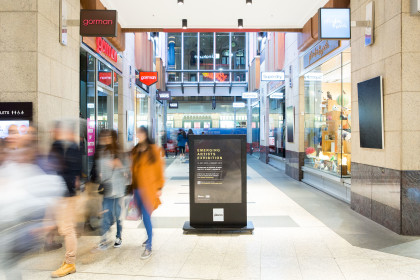 But this week circumstance forced me so far outside my comfort zone, I was virtually lost. I ended up producing the hanging and installation of 18 pieces of art into The Galeries retail space in Sydney for an exhibition of emerging artists in association with Art Month. Now, I can help with content and brand positioning but, no, I don’t know if we can drill into that wall.

Everyone else with the appropriate skills was busy, there was a need, so I put my hand up. The job required run sheets, the printing and positioning of decals, the careful placement of each piece in a non-gallery environment, liaising between four artists, The Galeries, Art Month and two suppliers. 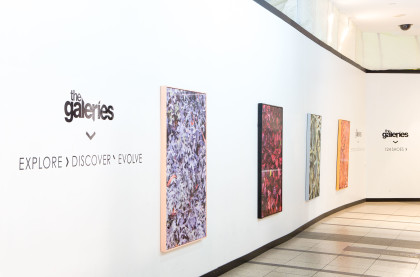 “So what?” you say, 23-year-old interns do that stuff every day. True. But old directors don’t. We have tried to set things up so other people do it for us. Sometimes that doesn’t work out.

So, knowing it was an important gig for a long-term client and nothing could be allowed to go wrong, there was only one thing for it – minimise the risk and manage myself as I would any staff member who was doing a job they didn’t have the aptitude for.

Me: “Okay, Mate, how are you going to file everything. You know you lose stuff. Can’t happen this time”

Me: “We know we’re a visual organiser. Make a nice clump of stuff on your desktop and clear everything else away. You need to be able to see everything at a glance.”

Me” Now, assign your tasks each day. In a list. Then do them.”

Me. “Right, awesome, gee you’re good, Anything else?”

Me: “Ask every question you don’t know the answer to. There’s lots.”

Me: “Get it answered and then you will know. Add it to your clump of stuff under “Stuff I Now Know.””

So it was on Monday evening this week, I found myself at midnight in a vast empty retail space, directing the nice guys from the hanging company and the decal company about where and how to do hang these delicate paintings. As the artists watched.

Can we drill through here? Will the decals stick here? Is that level? Is that the right height? Why isn’t there a hanging point where the plan says? By 1.45am the last painting was hanging, straight, in a space that suited it, with the right decal on the floor, with the right words. Amazing. Each one of those questions, through my desktop clump of strangely-named files, somehow answered themselves. Nothing fell over or went on fire.

It actually became a rewarding, collaborative project, once I got my head around the fact no-one else knows the sign guy’s number or make the executive decision to remove some rather lovely decals from a hoarding without asking.

The moral the story is small / medium businesses are hard. You have to do everything and be able to do everything, When it’s outside your skills set, discipline and confronting your own weakness is the only way to make sure there’s no mistakes. No-one else is going to do it.

Because as an employee, you get a few goes at screwing something up. As a business owner, you just don’t. Clients are way more ruthless than HR.

Right, I think I’ll go do something more in my comfort zone. Like write a story about comfort zones.

The Emerging Artists Exhibition at The Galleries launched, without a hitch, this week.

Phil Barker has edited NW and Woman’s Day magazines, and published such titles as Vogue, GQ, Delicious, InsideOut and Donna Hay. He is partner and creative director at The Artistry, a creative consultancy making events, activations and brand content. He is also a regular commentator on the life and style of Australian men in a column for Executive Style, Life on Mars.