Advertise with us
Posted 6 February, 2020


The role of artificial intelligence in marketing has come a long way in the past 10 years.

A technology that was initially met with some caution and confusion, is now benefitting global businesses in a host of ways.

But despite its benefits, businesses are split on whether or not to invest in the technology, according to a new report from Adobe.

The report found 41 per cent of leading businesses are already using AI in some form, whether that be suggesting keywords or detecting fraud.

However, some 47 per cent of mainstream businesses said they have no plans to invest in AI in the future.

Adobe tips customer focussed businesses to be the ones leading the charge.

“Artificial intelligence is coming inevitably to all businesses as it is integrated into marketing systems. But CX leaders are more likely to actively apply thinking technologies to their key challenges and free up their human resources to focus on creative and strategic goals,” Adobe says.

Adobe argues that the businesses that choose to embrace automation will have an advantage over competitors, given the ability of AI to empower people.

“The simplest argument for machines is to empower people. Marketers live in a world of processes built on data. Every day they spend time laying out emails, building reports and analysing campaign metrics, to name a handful of the repetitive but essential building blocks,” Adobe says in the report.

Looking specifically at how organisations with revenue upwards of £150M use AI, Adobe found data analytics to be the most common answer, with 64 per cent of companies deploying the technology, up from 55 per cent in 2019.

Interestingly, AI-powered programmatic advertising saw a decline in use from 2019 to 2020, down from 27 per cent to 23 per cent. 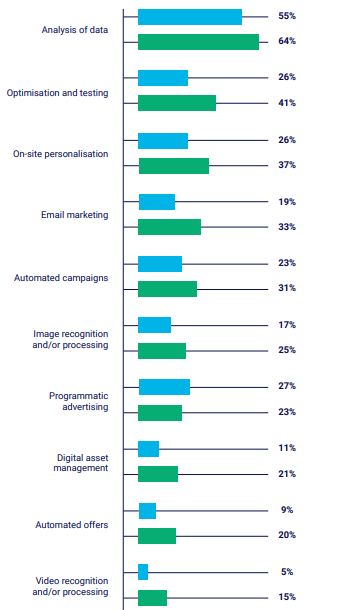