“If you do something interesting, people will be interested. It’s that simple,” says Google’s Head of Design, Patrick Collister.

It’s this philosophy which has led Patrick to becoming both a proponent and avid collector of letterbox media campaigns in all their quirky, memorable and physical glory.

The catalyst for his advocacy was a furry postcard he received in the mail many years ago for a Lost Cat and Dogs Home. His inability to shake his memory of both the creative example and who it was advertising led to researching similar letterbox campaigns from around the world.

During this research Collister teamed up with letterbox media providers Salmat to help shortlist and showcase 18 amazing examples into a book titled ‘I Wish I’d Thought of That’.

“Unfortunately no Aussie campaigns made the cut” says Salmat’s Head of Agency Sales, Luke Sullivan, “but hopefully this global showcase of emerging trends and creative innovations will educate and inspire local creatives  that letterbox media can be a powerful complementary medium to any channel strategy.”

We have made a selection of some of these best practice letterbox media examples below. For further inspiration the entire booklet of case studies, with results and commentary, is available here.

French Karate magazine Karate Bushido wanted customers to renew their subscriptions and attract some additional recruits. With the help of ad agency TBWA in France the magazine targeted near to 3,000 potential subscribers. The potentials found a wooden plank in their mailboxes with all the details to subscribe. 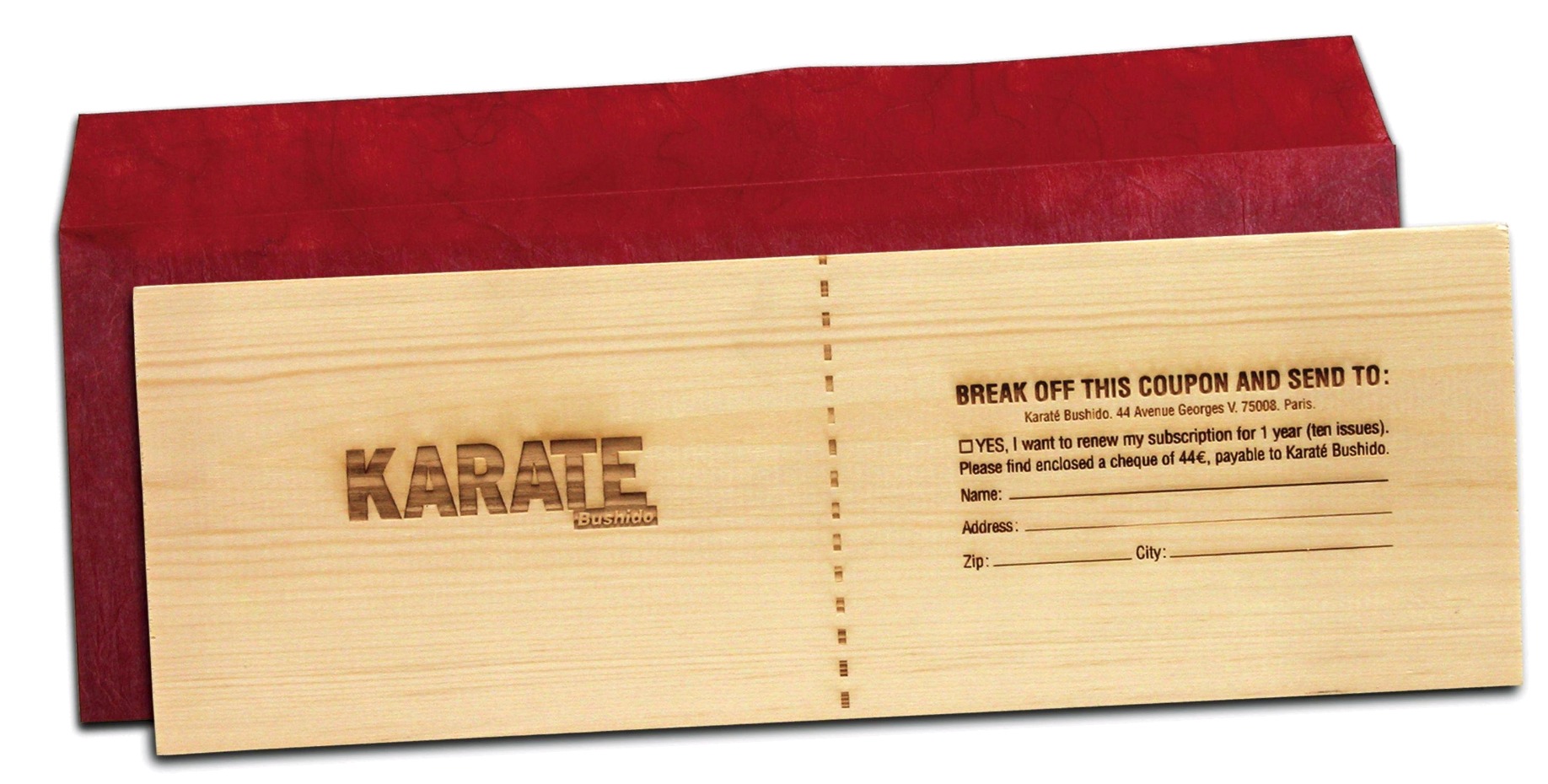 “This has been described as one of the most brilliant ideas to drop through a letterbox in the last ten years,” says Collister.

“It makes a statement about the brand just as dramatically as it urges a transactional response.”

Indian cosmetic company Lass Natural Cosmetics has minimal artificial bits and bobs in its products, however that means the creams and ointments don’t last as long on the shelves.

Indian agency Mudra Communications envisioned coupons for customers that would literally dissolve to showcase the product’s quick shelf life, coupled with the fact it’s au naturale, as is the brand. 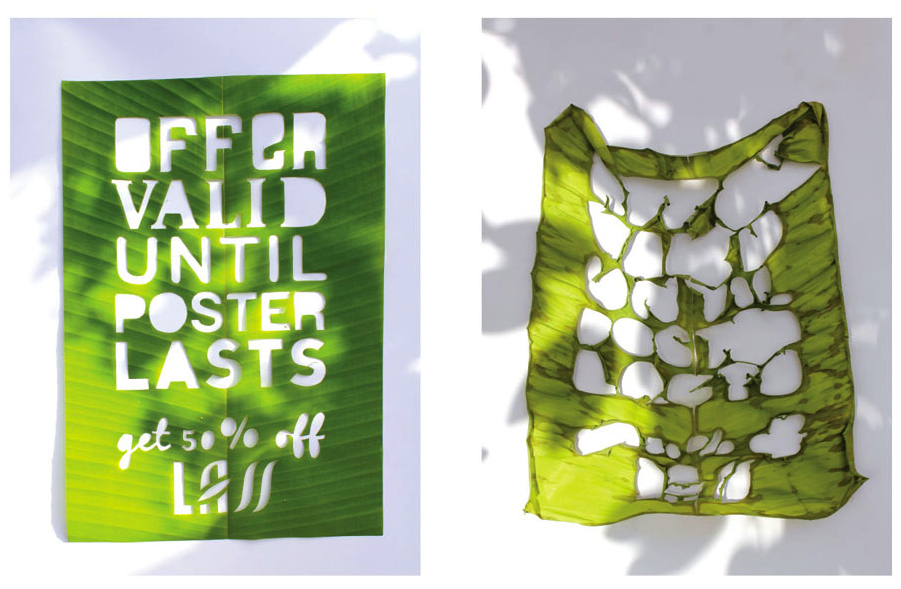 70% of the coupons were redeemed. If you didn’t redeem it, you would just have a rotting leaf on your hands.

The Salmat team says: “It’s refreshing to see that not everyone in advertising is fixated on TV and online film. At a time when direct marketing is increasingly about clicks and the number of views, this had an immediate and measurable effect on the bottom line.”

Land Rovers can take on any obstacle in the desert; their owners cannot. This edible survival guide for the Arabian Desert, created by Y&R in the UAE, was delivered to 5,000 homes in Dubai. It has the nutritional value of a cheeseburger. So it’s like going to Macca’s basically. It also had reflective packaging which you could use to signal for help.

The Salmat team liked how this edible book was created to inspire the mind, not the tastebuds. “It kindled a sense of adventure. … When you hold a pack like this in your hands, it simply expands in your mind.”

In an effort to showcase the horrendously high number of child soldiers in Africa, UNICEF and ad agency Y&R in South Africa sent out 1,000 packs of toy soldiers, but the toy soldiers were actually children doing handstands, riding a bike, playing soccer. 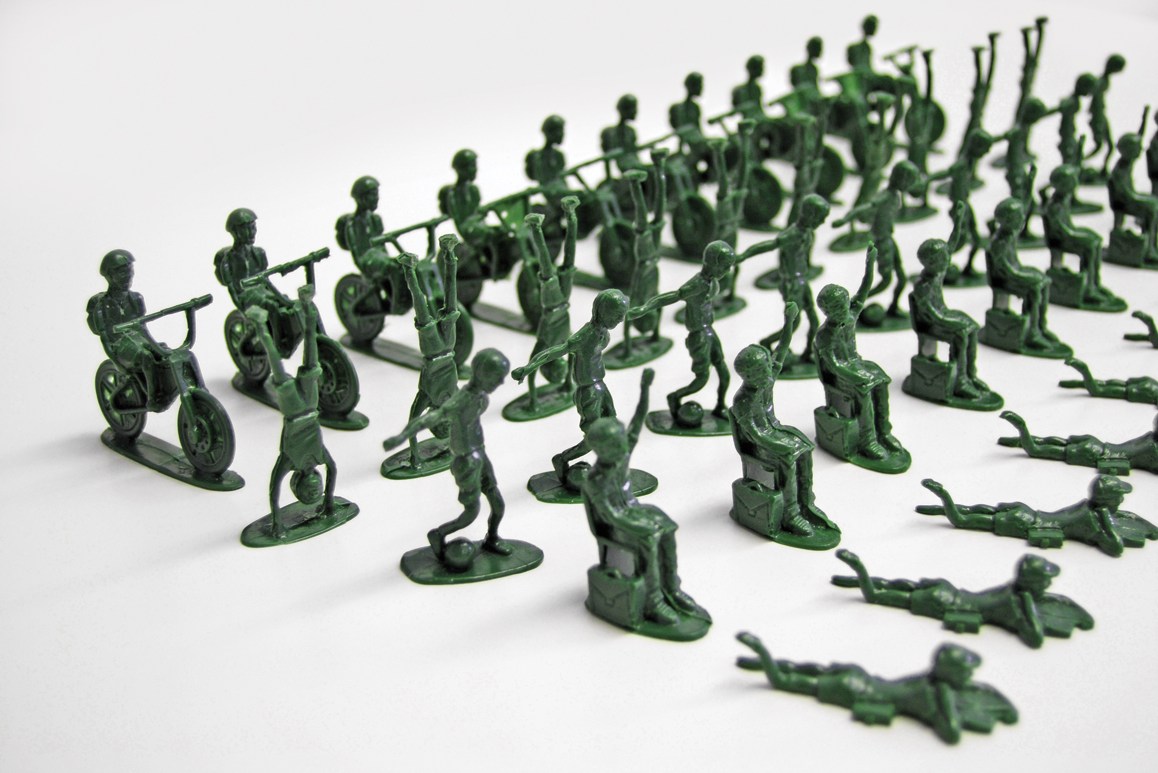 UNICEF says there was an immediate rise in volunteer applications and donations for its child soldier rehabilitation program.

“This pack went to a thousand people and reached a million or so more,” says the team. “When you have a strong creative idea like this, it goes ‘viral’, people want to share it and talk about the issue it raises. Yet many hardnosed marketers would never have seen its potential. Many would have considered it too expensive or its reach too small.

“The numbers would suggest that an insert in a national newspaper or a low-cost delivery to a couple of hundred thousand homes would be a more judicious approach. But that’s the thing about numbers, they never make provisions for the incredible possibilities of the human imagination.”

Few people know how much carbon dioxide they’re emitting every day from simple household things. The UK Government along with agency Tullo Marshall Warren delivered white boxes to housing commissions, encouraging them to sign up for a training toolkit on saving energy. When the box was opened a balloon floated out. It was the equivalent to the amount of carbon dioxide released into the atmosphere after leaving a light on for 40 minutes. 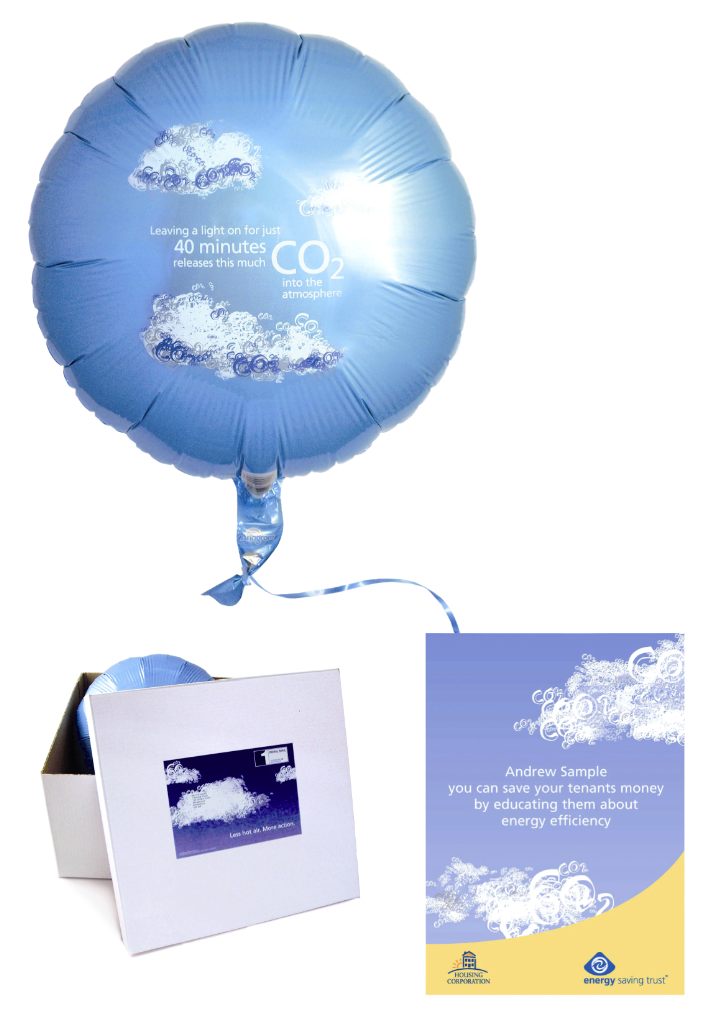 The results showed 40% of those who received a white box ordered the training kit, and 96% of those who attended the session changed their energy behaviours.

Wales is wet. No denying it. For this reason, the Welsh country probably isn’t high on your list of ‘Ultimate Holiday Destinations’.

Visit Wales didn’t let that stop them though, devising a letterbox ad campaign through direct marketing agency Partners Andrews Aldridge to show all the things tourists could do in the rain. 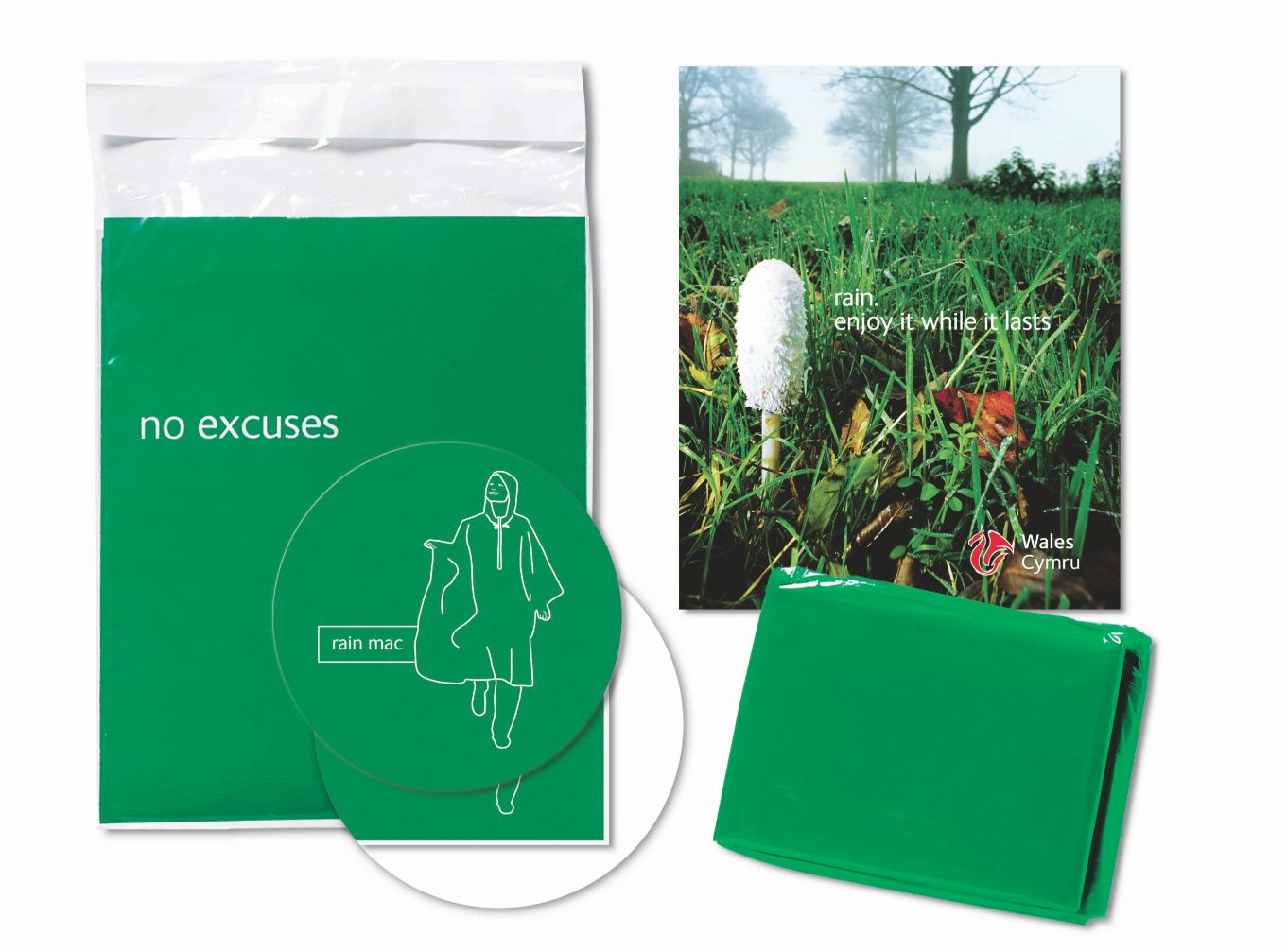 The results of the campaign show an extra 14,883 people visited Wales, even in the rain. “It’s friendly and tongue-in-cheek, what’s not to like?

Jeep wanted its new Cherokee to appeal to those with an adventurous nature. Leo Burnett Brazil created a letterbox campaign that dropped off objects from a foreign country into letterboxes. The campaign suggested people may like to return the objects, a twig, stone and some water, to the countries they belonged to.

Those that returned the objects were set up in hotels by Jeep. 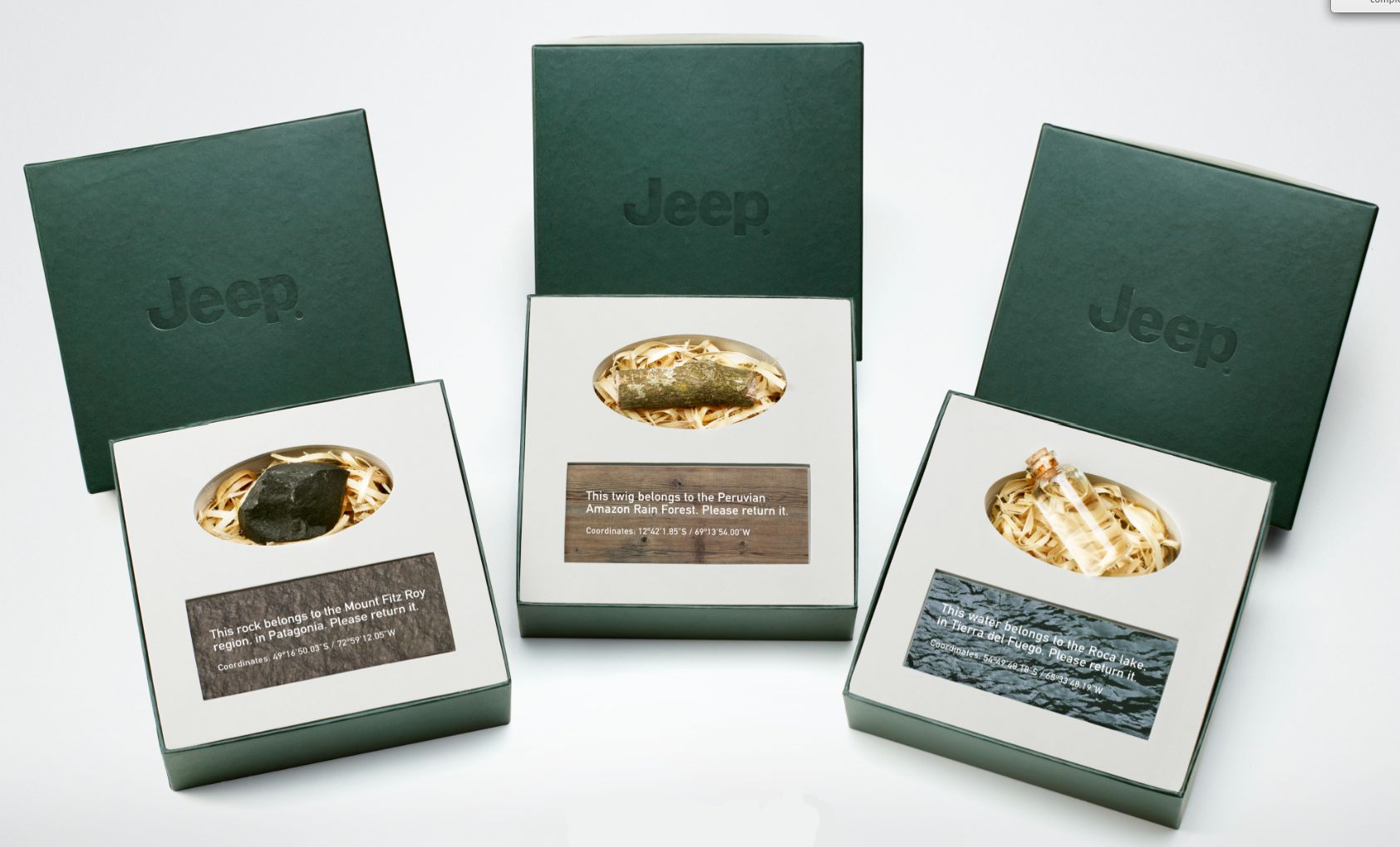 “Even if you chuck the rock in the yard, the point has been made – this Jeep can take you anywhere and that’s a solid testimony to the power of a good idea.”

Glow in the Dark

The idea executed by agency Draft in NZ saw flyers with fluorescent ink printed and delivered to people’s mailboxes. Recipients literally had to turn off the lights to read the message. 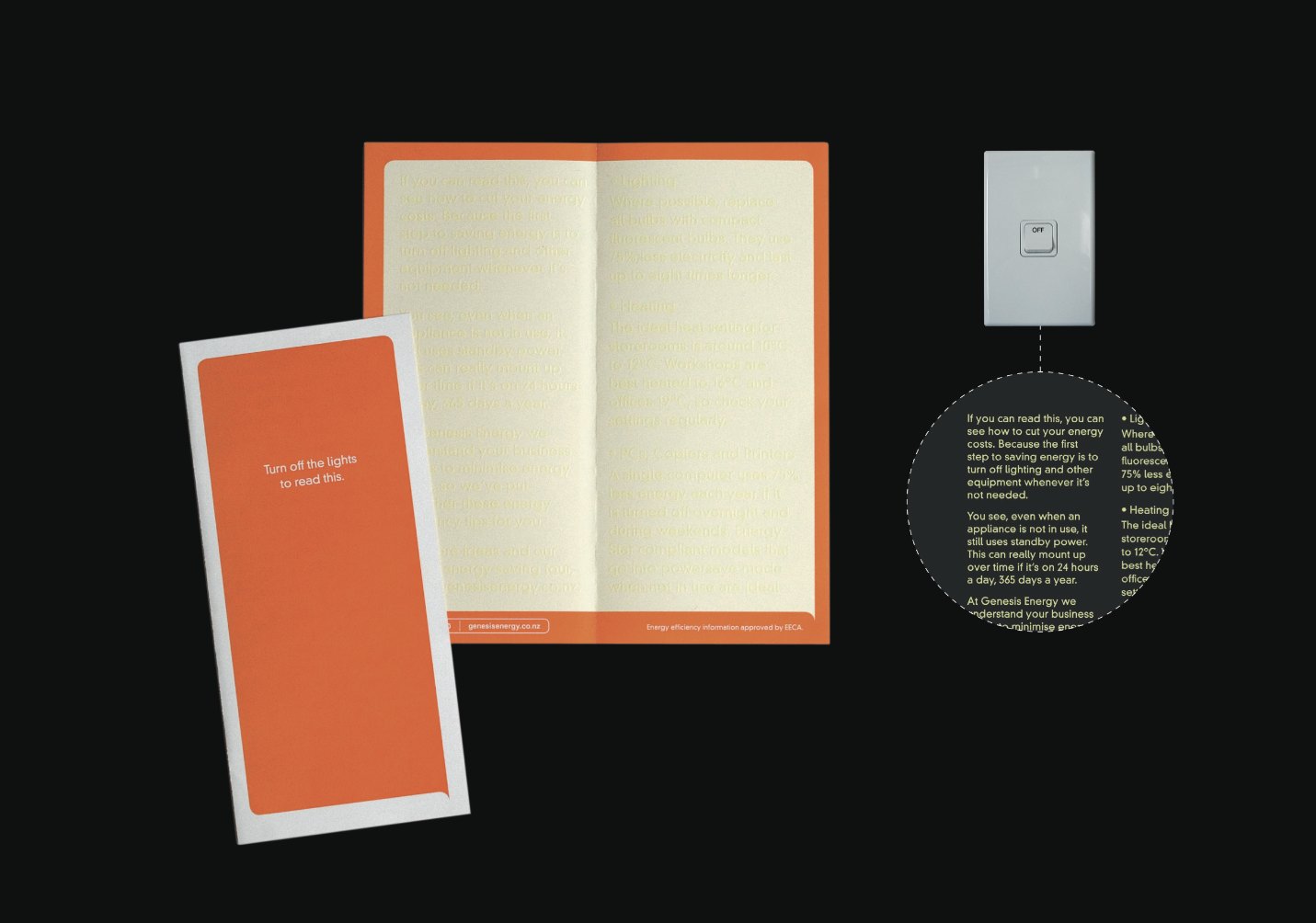 “What is interesting is how playful this idea is,” says the Salmat team. “Whoever picks it up is almost certainly going to be intrigued enough by the message (turn off the lights to read this) to do it.”

To check out the remaining shortlisted letterbox campaigns, you can order a free copy of the book here.