The move came after a Change.org petition which attracted more than 38,700 signatures since being launched by advocacy group Collective Shout three months ago that claimed the tile was sexist and promoted rape culture and was inappropriate for children to view. 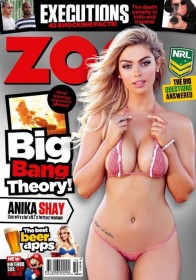 The Australian Christian Lobby has also complained to attorney-general George Brandis requesting that the racy magazine be re-classified.

Men’s lifestyle magazines have long had troubles being stocked in family-friendly supermarkets with Coles and Woolies both requesting cover changes to titles or that issues be bagged in plastic.

The latest blunder comes in a string of incidents for the struggling Bauer title. Only recently the Greens senator Sarah Hanson-Young successfully sued the magazine for defaming her after her image was photoshopped onto the body of a bikini model.

“As a mother it is a huge concern that my own daughter can Google my name and find images of my face photoshopped onto the body of a near-naked woman,” Hason-Young said of the incident. “Young women need to see their female leaders taking a stand against sexism. My daughter needs to know I did.”

From all this the future of Zoo now looks bleak. In May, it was withdrawn from the audit figures when its weekly sales fell into the low 20,000s. Bauer has said it will continue to publish the title, however, there has been a great deal of speculation that that is only to do with existing license agreements with the UK edition and when they expire it’ll be kaput for the title.

That said, the title celebrates its tenth anniversary in Australia in January next year.