Woolworths’ Marvel Super Discs promotion, where shoppers are handed a free pack of plastic super hero discs – aimed at the kiddies – has turned to disaster after some of the hard-to-find collectables turned up on eBay for as much as $800!

For readers who aren’t parents and don’t have kids under the age of about 10, the grocery chain has been handing out little packs of the discs to shoppers at the checkout, with 42 discs in all to collect. 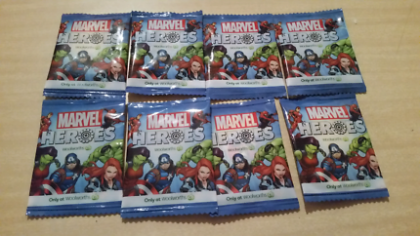 However, angry shoppers have taken to Woolies Facebook page to rage that six of the discs are incredibly difficult to find to complete their little sprog’s collection and the “number 42 Hulk disc” practically doesn’t exist at all!

An online black market has now sprung up, with collectors being asked to pay big dollars on sites like eBay to complete collections. 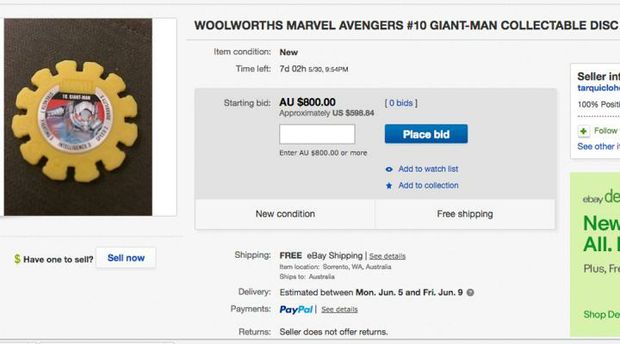 Parents have fumed at a lack of discs and suggested the promotion was the only reason they’d chosen to shop at Woolies in the first place and had left their kids upset. While others have accused the grocery chain of deliberately making too few discs to try and drive sales.

Woolies has denied the “rare” disc rage and said it manufactured a million of each of the 42 discs.

One cranky mum posted on Woolies Faceboook page: “Woolies. This is disgusting. People aren’t stupid. Everyone can’t need the same numbers and you tell us they are not rare.”

Another added: “You create constant crazes that get children involved yet it brings constant disappointment.”

While a dad wrote: “My two kids are giving me grief over your stupid discs. If you want me to shop at Coles you’re doing a great job.”

And another: “We luckily do have the Hulk disc but I think it’s disgusting that people are making money off this when it’s meant to be something good for children.”

Others thought it disgusting that people were prepared to spend big bucks to complete their children’s collections on discs that are in fact free.

“I’m shocked that people are BUYING these things,” penned one mum. “They’re FREE, people!! And if your kid doesn’t get the whole collection, then that’s a lesson learnt, not a reason to turn to the black market of supermarket collectibles!”

However, Woolies has attempted to play down the backlash, a spokesperson saying: “The Hulk disc is one of seven discs in the collection that are more limited than the others in the 42-disc collection –  but they are actually still in plentiful supply, with more than one million of each in circulation.

“The characters featured on those seven discs have the highest attributes (strengths, speed, durability etc) in the Marvel Universe,” he said.