Despite the ambiguity, the post soon went viral, gaining thousands of likes, shares and comments.

And in further proof that simple is best, the post has so far garnered 417 comments – many of which are hilarious – and 68 shares.

“This post truly inspired me. My friends saw this post and felt moved. I especially likes when you mentioned ‘Western Sydney University’. Amazing stuff thank,” one Facebook user said.

“I am packing my bag Thanks Western Sydney University,” said another.

The university has already started capitalising on the viral popularity, pointing potential students towards its applications page. 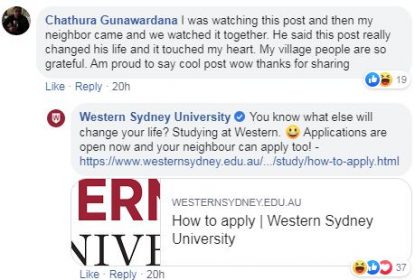 A spokesperson from the university told B&T the social media stunt was a way to engage with its audience in a relevant style.

“Leveraging trends like this one not only has the benefit of helping extend our organic reach but it’s also the right tone for our audience in these channels where the expectation is that we are in touch with their needs.”

But the posting your own name on Facebook strategy appears to predate even Netflix’s stunt, with a host of Australian bands taking part in the gimmick earlier this week.

Ball Park Music, Phil Jamieson and Sweater Curse have all had some fun with the ploy.

It can all be traced back to Australian music personality Max Quinn, however, who boldly claimed last week it is a way to ‘hack’ Facebook’s algorithms to boost posts without paying.

to these people I always say: post about max quinn as much as you can, it always works.

i encourage you to try this for yourself pic.twitter.com/wqn2v9dnyD

If the popularity of all these posts is anything to go by, Quinn could be onto something.

Life after a rebrand

It’s all a little more pertinent for Western Sydney University, however, which has spent much of the past four years clarifying its name.

At the time the change was billed as a way to reinforce the university’s leadership role within the region by “putting Western Sydney first”.

As part of the rebrand, the university used the #NewWS hashtag to promote awareness of the change.

While it is unclear whether this latest social media post is a continuation of the rebrand strategy, it is not the first time a company has used the technique.