Vogue has celebrated its 100th anniversary by including possibly the cutest 100-year-old model, in a celebration of timeless style and class.

While the Duchess of Cambridge Kate Middleton has taken prime spot, gracing the cover in all her royal glory, this pint-sized elder has caused much intrigue in the issue.

British department store Harvey Nichols decided to mark the centenarian by creating an ad, to appear in the new June issue of Vogue UK, featuring a woman who has been around for as long as the magazine.

Enter Marjorie ‘Bo’ Gilbert, the lovely lady dressed in chic clothing from the latest season styles, is known by friends in her assisted living facility in Birmingham for having a keen interest in the fashion world. 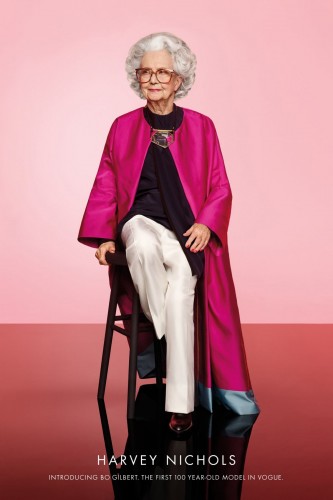 Harvey Nichols separately made a video featuring Gilbert, discussing how the average model age is between 16 and 25, and how she is defying the odds to appear in an ad campaign.

“I do things that I think a lot of people wouldn’t do at my age,” Gilbert says.

“I always liked keeping myself looking quite decent, even if I wasn’t going out. I dress to suit myself – I certainly don’t dress up for boys!”

“I love wearing nice things, it’s always appealed to me, and it still does,” she adds.