Channel Nine has been forced into damage control after a $130,000 viewer giveaway on its morning breakfast show Today was labelled a set-up and scam.

To win the hefty jackpot a viewer simply had to answer their phone, unprompted, at home with “I wake up with Today“.

Yesterday, the very lucky Josh Huxley (below) from Wyong on the NSW Central Coast did just that. Coincidentally, a Channel Nine camera crew was waiting nearby to film Huxley’s reaction to the win, prompting many viewers to suggest the prize and winner had been predetermined by Nine.

However, Huxley, who was straight on the phone to the show’s hosts Lisa Wilkinson and Karl Stefanovic on news of his bumper win, denied knowing anything about the camera crew lurking outside his home. 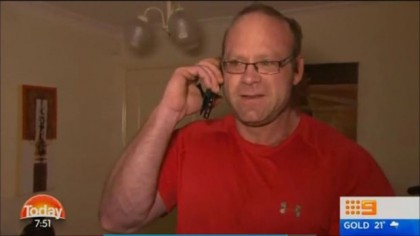 A Change.org petition has been organised by disgruntled viewers who are petitioning the NSW Liquor, Gaming and Racing Office to have the competition investigated and monies paid refunded.

Queenslander Coralie Allan, who started the petition, said: “The competition was closed – yet Channel Nine was still making money from people calling in up until the actual segment.

“Or the winner was chosen in advance – so entrants were disadvantaged from the beginning and there entries were null and void, in spite of having paid for them, as evidenced by the ‘planted’ TV crew in attendance,” Allan said, her comments reported on Fairfax Media.

However, the network has denied the claim and last night issued a statement to media, sent to B&T, confirming the competition and prize were bona fide.

“To correct any misinformation and concerns, Nine reaffirms the competition is run in accordance with clearly stated terms and conditions to protect all entrants and ensure fairness in the operations,” the statement read.

“As a live television show, when it is possible to have a crew in the vicinity of the call recipient, and if they answer the call correctly, we are able to capture the reaction as soon as possible.

“Often, the public is unaware of the presence of a crew because the call is not answered in time. When there is a moment of joy to be shared, we endeavour to do so with our viewers,” the statement read.

However, angry Today viewers have taken to Nine’s Facebook page to register their disgust at the competition.

One aggrieved viewer wrote: “Surely that was a set up? He answered so quickly and then within seconds a camera was in his house. Who let the camera crew in. It just seems so strange. Everything went so smoothly, the satellite was in sync with the phone, he seemed like he was already camera trained and knew that he had to jump up off the couch, turn around and face the camera. It just all looked rehearsed.”

While another added: “Disgusting! Shame on you Today show. You accepted my money, my entry and thousands of other peoples, only to find out you clearly already knew who you were going to call. deceitful as far as I’m concerned. so disappointed in this show now!”

The latest controversy for Nine and Today follows on from its coverage of the wedding of the network’s journalist’s Peter Stefanovic and Sylvia Jeffreys in early April. The breakfast show was accused of spruiking and name-dropping companies involved in the wedding, presumably in some sort of contra deal.