Time magazine is marking President Donald Trump’s first month in office with a cover story showing Trump sitting in the Oval Office with a storm brewing and the caption “Nothing To See Here”.

The accompanying story Inside Donald Trump’s White House Chaos by Phillip Elliott, Washington Correspondent for TIME, reflects the tumultuous first month of Trump’s presidency. “Ultimately, Trump is the only person who can calm the storm, fan it further or just let the show go on,” Elliott writes.

“But the clock is ticking. Even popular new Presidents enjoy a limited window of effectiveness, at best six to nine months.”

The storm is brewing on TIME‘s cover: 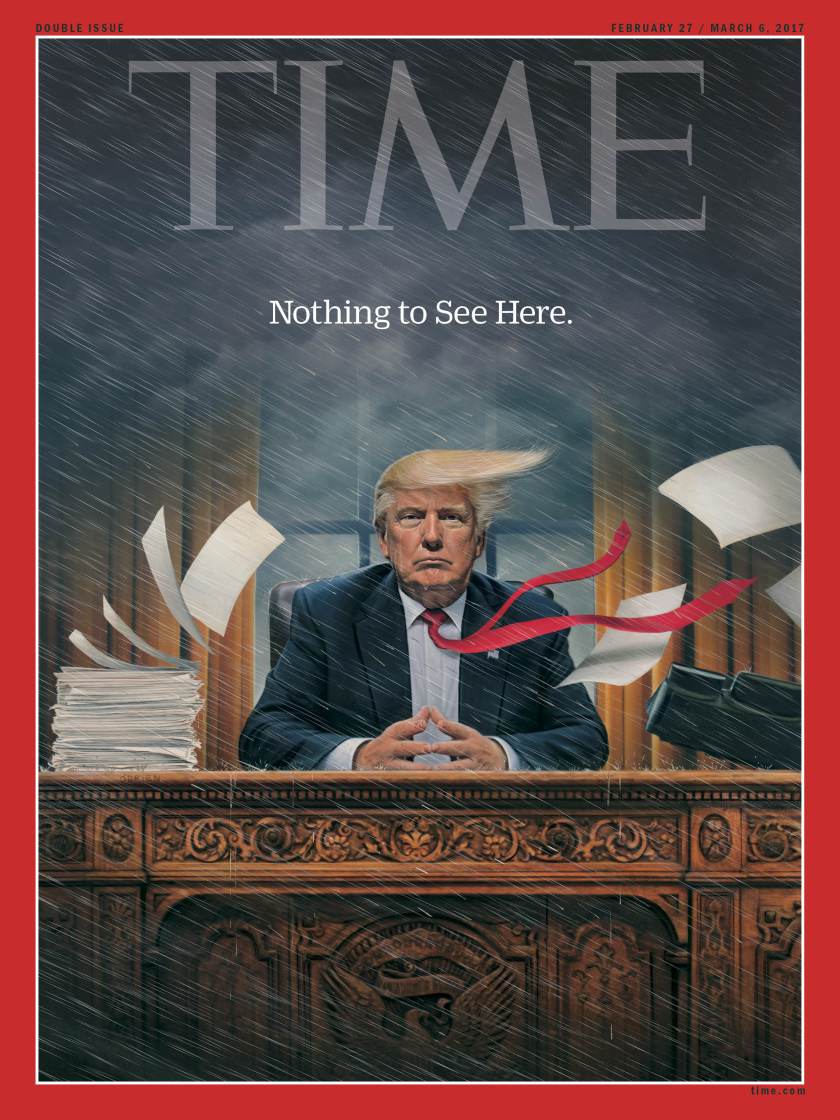 The editor of Time magazine Nancy Gibbs appeared on MSNBC program Morning Joe to talk about the magazine cover:

“If you win the office having done things that people continuously told you ‘you can’t do’, why would we expect anything to change? The difference now is that the people telling Donald Trump he can’t do that are not TV talking heads or political opponents, it’s judges and people with subpoena power. We’re all watching wondering what will it take for him to conclude that worked so well for him in getting the office is going to make it impossible to do the job.”

The cover was created by Brooklyn-based artist Tim O’Brien, his art has appeared on over two dozen TIME covers since 1989, with subjects ranging from Pope Benedict XVI to Osama Bin Laden. “Painting this cover was like imagining a movie,” O’Brien said. “I see it all in my head, the swirling rain, the wind blowing papers across the desk, the splats of the heavy raindrops on the desk.”

Trump hasn’t tweeted about the cover- yet.

Hey, look @realDonaldTrump ! You got another TIME cover! https://t.co/9gCXSUeGob

For a man who often brags about how many @Time covers he's been on this must really sting. https://t.co/XLT2v8pl2G

Six of the seven @TIME covers from 2017 so far are about politics pic.twitter.com/K2jc9iw9pg

What a visual!
And if you feel like you've struggled to keep up w/ the news, this story sums up a ton of info. https://t.co/lIy2HXj80x