If the Aussie football team – the Socceroos – can knock-over the Hondurans tonight and, in doing so, advance to Football’s World Cup in Russia next year then that’s a cool $100 million to the code’s bottom line says one of the games’s more astute judges – former player, commentator and agitator, Craig Foster (pictured below).

In a quick chat (and a beer) with B&T at yesterday’s SBS Upfronts, Foster agreed the national team deserved favouritism (predicting a two goal-plus scoreline) over the Hondurians that would see the Socceroos advance to their fourth straight World Cup in Russia kicking-off in mid-June 2018. 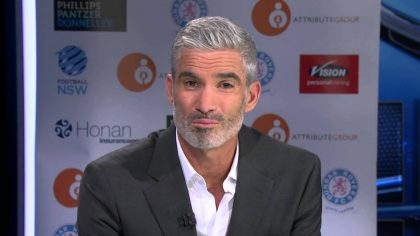 Platitudes and a trip to Russia 2018 aside, Foster agreed that a win tonight would not only do wonderful things – yet again – for the code locally but could be worth an estimated $100 million in terms of marketing, sponsorship, and shirt and apparel sales.

“I’m pulling that figure out of the air,” Foster confessed, “but I would predict it would be somewhere around that value when you factor in things like TV ratings, expenditure and Socceroos’ merchandise.”

Foster added: “What you can’t put a value on is how many young Socceroo fans will tune-in for Russia 2018.

“How many young Australians will watch their first World Cup in 2018? How many five, six, seven-year-olds will want to see Australia do well and that will tie them to the game for the rest of their lifetimes. That’s the great thing about a [soccer] World Cup, it gets a whole new generation interested in the game.”

However, if (heaven forbid) the scoreline doesn’t favour Australia tonight (meaning we don’t qualify) then Foster argues the game’s in a credible enough state that we need not slit our wrists!

“The game [in Australia] is in so much better shape since 2006 [when Australia stunned just about everybody at the World Cup in Germany] that even if we didn’t make it [Russia 2018] then I think people would still be OK with it.

“The great thing about Australian football is that we’re in the most progressive league in the world, Asia [the Socceroos won the Asian Cup in 2015], and that’s a good sign that the game will survive and prosper,” Foster said.

Better still, if, Foster says, the Socceroos can qualify for Russia 2018 then we actually stand a pretty good chance of progressing with some more highly fancied teams (the likes of Italy, the US and the Netherlands, as an example) having all been bundled out during qualifying.

“We’ve [the Socceroos] have had so many ‘groups of death’ [qualifiers] that I think that’ll stand them in very good steed and, you know, if we can get into that final 16 then anything can happen,” Foster said.

And Foster’s prediction for a 2018 World Cup Champion?