The average length of time a CMO stays in their role has dropped to 44 months in the States, according to the Wall Street Journal.

Quoting research from firm Spencer Stuart, the WSJ said it was the first time the tenure had dropped over the past decade. In 2014 the tenure had been up to 48 months on average.

The study – which looked at 100 CMOs of big US brands – said the slip was due to people retiring, more mergers and acquisitions and a number of shuffles around.

“The intensity, the pressure and the demands on CMOs is admittedly unlike I’ve ever seen in my career,” said Greg Welch, a consultant in the study, according to the WSJ.

While the study was in the States, the Australian marketing arena has seen shuffles too. Just the other week, Kim Portrate’s position of CMO was “removed” by online travel company Helloworld, effectively making her redundant.

We’ve contacted the industry bodies to find out what this means for the Aussie market, we’ll update the story when we hear back.

Nevertheless, the tenure of CMOs has doubled since 2004 in the States, when Spencer Stuart first starting measuring the length of time.

Back in 2004, the average tenure was 23.6 months. Besides a slight dip backwards in 2007, the tenure has steadily increased up until last year. 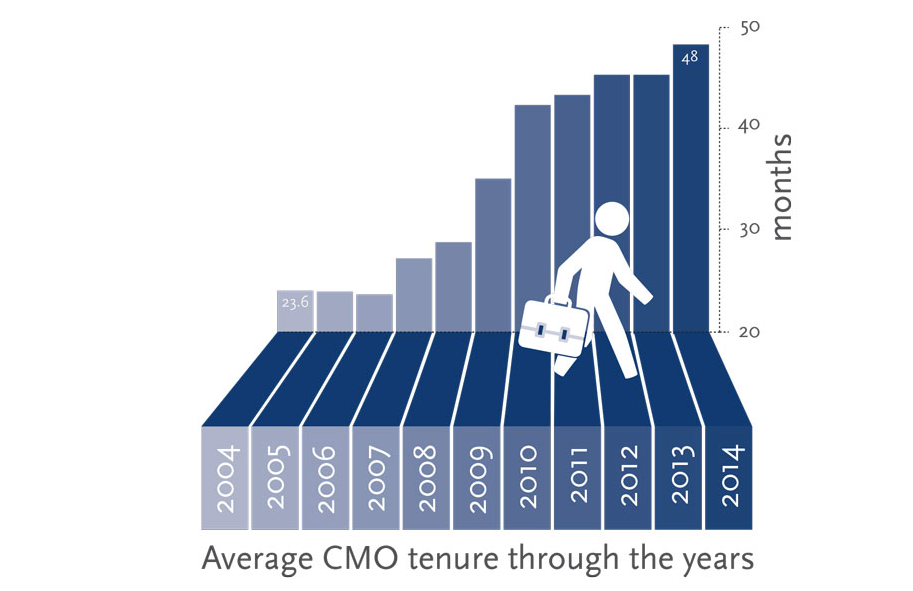 In the year prior – when CMO tenure was at its highest – Welch said there’s a perception in the States the role of a marketer is relatively short.

“There is a lingering perception that CMO tenure is short, but the reality is the data show long-term stability in the role. This has been the case for several years,” he said.