Gee that data gave me a shiver, said nobody ever! That is the premise behind why brands need to get on top of their storytelling, two experts in the field have told a masterclass put on by innovation agency How to Impact.

While it’s been established for some time that the human brain has been hammered into submission by data to such an extent that our cognitive acumen is now more feeble than that of a goldfish, Yamini Naidu, a one-time economist and now the self-styled leading voice in corporate storytelling, says we’re hard wired to tell and listen to stories.

“While we can only listen to data for about nine seconds, our attention spans expand to between 60 and 90 seconds when we’re listening to a story,” she said.

Stephen Oliver (a leading local documentary filmmaker) told the audience that the key to branded storytelling was to make sure you never mentioned the brand. The reason for that, he argued, was that our bullshit filters are now so finely honed, we can smell it a mile off.

While Red Bull is the go to example of this in action, for other brands it’s harder to have the discipline to avoid the standard corporate messaging in any communication.

Similarly, authenticity is a key plank to spinning a yarn that others will swallow. Think about the standard post-match sports interview with a rugby league player: “It was a game of two halves”. Or a police spokesperson describing a crime: “The offender was a male Caucasian of average build” and it’s not hard to see why truth and giving something of oneself is a key aspect of good storytelling.

By “hitting us with a sledgehammer of data” we tend to tune out and change the channel, said Oliver. However if we use the soft power technique of storytelling, we can gather an audience’s attention far more easily.

Oliver related his recent experience of making the documentary series ‘What’s the Catch’, to change seafood labelling laws in Australia. While the subject appears quite dry on the surface, Oliver was able to draw in a huge audience and mobilise politicians into action by telling the discrete story of one trawler in Thailand that essentially raped the ocean floor for “trash fish” to feed intensive prawn farming operations there.

The story told us why we wanted to know that our prawn on the barbie was a wild-caught Queensland prawn, fished sustainably, rather than a Thailand prawn. Suddenly seafood labelling became a whole lot more interesting because we had a story rather than a bunch of facts, he said. 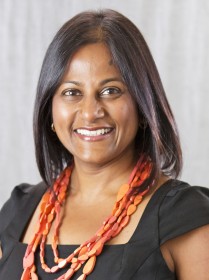 Yamini Naidu said that there were only three jokes about economists and lawyers and the rest were true stories.

Finally Naidu warned however, that storytelling isn’t an excuse to make stuff up off the cuff. “The best ad lib stories have been practised for hours in front of a mirror,” she concluded.