A new report into the enterprise value (EV) of Europe’s top soccer clubs has valued the top 32 European teams at a whopping 29.9 billion euros or $A45.2 billion.

The annual report by global accountancy firm KPMG is called Football Clubs’ Valuation: The European Elite 2017 and had the EPL’s Manchester United as the top club for EV. 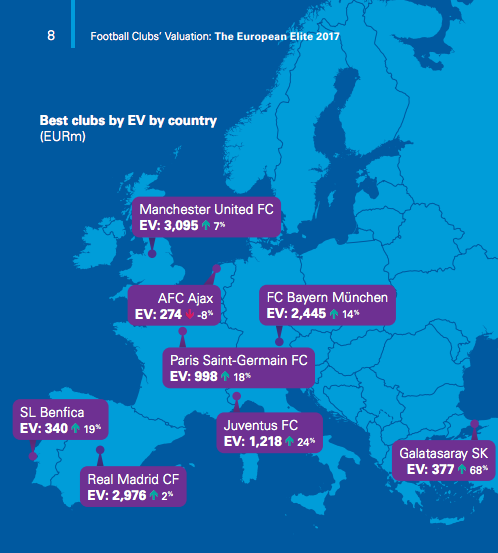 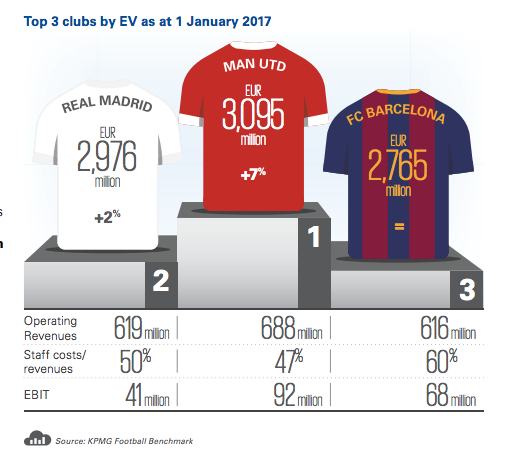 The chief findings in the study included:

• The Top 10 clubs comprise more than two-thirds of the overall EV; within this group, Manchester City FC have overtaken Arsenal FC in fifth position.

• English teams now six of the top 10 positions on the list together with two Spanish, one German and one Italian.

• In terms of growth per se, Olympique Lyonnais score the best result (+71 per cent), followed suit by Galatasaray SK (+68 per cent) and Sevilla FC (+44 per cent).

• The 2017 edition had three new entrants on the top 32 – Leicester City FC, Athletic Club Bilbao and Beşiktaş JK. As the lead characters in what has been referred to as the greatest sporting fairy-tale of all time, Leicester City FC’s journey to the English Premier League crown in 2015/16 has passed into the annals of history, earning them a remarkable 16th position on the report.

Andrea Sartori, global head of sports at KPMG, said of the study: “In terms of media rights value, the English Premier League sits comfortably at the top of European leagues, although other major leagues have outlined well-defined strategies to compete for the attention of global fans.

“However, unlike other factors, an individual club’s ability to influence their broadcasting income is often limited, despite the very evident impact this revenue stream has on their Enterprise Value.

“The aggregate value of Europe’s 32 leading football clubs suggests that the overall value of football, as an industry, has grown.

“While this is partially explained by football’s broadcasting boom, the internationalisation of the clubs’ commercial operations, their investment into privately-owned and modern facilities, and overall more sustainable management practices, are also key reasons for this growth,” he said.