According to the study, entertainment and leisure items account for the greatest number of internet shoppers, with 4.5 million people buying something from this category in any given four weeks, followed by fashion (2.7 million), food and beverages (2.4 million) and reading material (2.2 million). 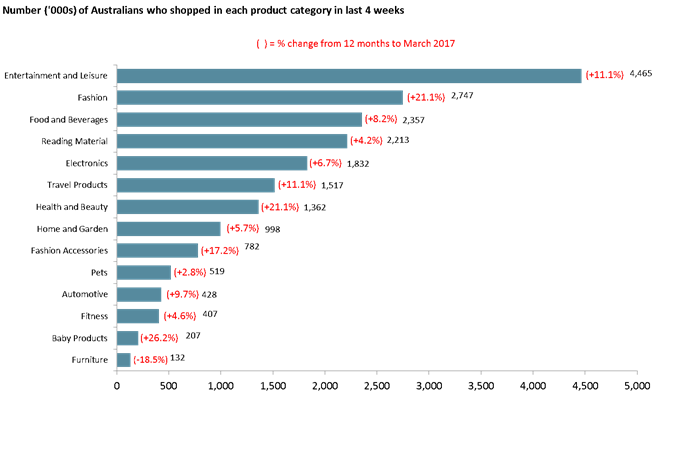 Online shopping has risen for every product category in the chart except for furniture. Between 2017 and 2018, fashion shoppers (2.7 million) and health and beauty products (1.4 million) both increased sales by 21.1 per cent over the year, with entertainment and leisure up by 11.1 per cent.

While online shopping is gaining ever-increasing momentum with Australian consumers from all walks of life, those most likely to make purchases this way still tend to be from the more technologically savvy end of the spectrum.

Nearly half of all online shoppers (49.1 per cent) fall under the umbrella of either technology early adopters or professional technology mainstream, the two most digitally inclined segments of the population.

As their name suggests, technology early adopters are always the first to purchase and use new technologies, and tend to be well educated and high-earning.

Whereas they comprise 19.4 per cent of the overall Australian population, they account for 28.9 per cent of all people who buy something online in an average four weeks.

Commenting on the study, Roy Morgan CEO, Michelle Levine, said: “The data is unequivocal, Australians can’t get enough of shopping online. In any given four-week period, more and more of us are purchasing products as diverse as entertainment, clothing, food, reading matter, health and beauty products, furniture, and electronics via the internet. With nearly 9.5 million Australians or 46.8 per cent purchasing online in an average four week period and the rapid growth over recent years, this is a retail revolution.

“This rapid growth represents a major opportunity for the growth of Amazon when it develops its full product offering. Australian bricks and mortar retailers are under considerable pressure from overseas and local online retailers.

“Understanding the technology-specific attitudes and behaviours characterising each Technology Adoption Segment is a great way for online retailers to target their best prospects, approach their marketing decisions more strategically and ensure they’re ready for the challengers ahead, particularly from Amazon. Next week we will explore more about Amazon Today– and how Australians feel about it.”