Analysis of long-running trends in Australia reveals key life-events are happening later in life than they did a decade ago. Key life-events highlighted include moving out from the family home, living in a shared household, renting, having a home loan, and owning one’s own home.

The trend to living at home for longer has directly contributed to other key indicators including living in a shared household, renting, and having a home loan being delayed until later in life. 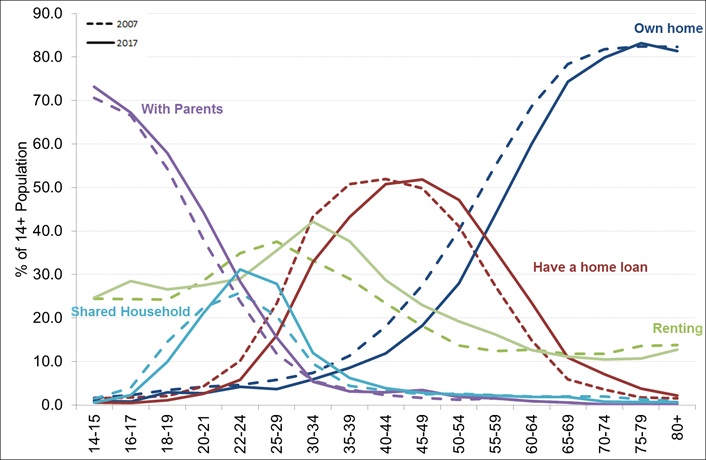 When do Australians buy a house?

Michele Levine, CEO, Roy Morgan Research says that long-term employment trends and an increasingly expensive housing market are delaying the traditional Australian dream of owning one’s own home: “Important life-changing decisions are happening later in life than they used to – even compared to just a decade ago. Australians are living at home for longer, a significant proportion are now renting well into their 40s, and it is only near retirement that a majority of Australians are finally owning their own home after a lifetime of work.

“The changing shape of Australia is driven by two demographic trends – millennials are staying at school or in education longer and staying at home or in shared accommodation while they do that; Baby Boomers, rather than paying off homes as quickly as possible, are using the equity in their homes to renovate, upgrade, invest or finance whatever other activities that want to engage in.