A new study has found that when it comes to Australians’ free-to-air viewing habits, news and reality rule the remote.

The study, by Roy Morgan, found that news and current affairs were the most watched genre with 61 per cent of Aussies watching it in any given week.

When it came to reality shows – MAFS, MKR, The Bachelor – some 41 per cent of respondents said they watched it in an average week.

Just over a third of Australians watch current affairs shows (34 per cent) such as Four Corners, A Current Affair or 60 Minutes in an average week.

When it came to the drama genre, 34 per cent said they watched shows such as Criminal Minds, Midsomer Murders or Call the Midwife on TV in an average week.

Other popular categories include home/lifestyle/travel shows (30 per cent), comedies (30 per cent) or documentaries (29 per cent). The tenth most watched TV genre was “caht” seen by 19 per cent of Australians in an average week.

In an era of proliferating entertainment options the TV still retains a key role as an important medium to reach large numbers of Australians and there are some trends that emerge even when looking at a relatively simple gender break-down for different types of TV genres. 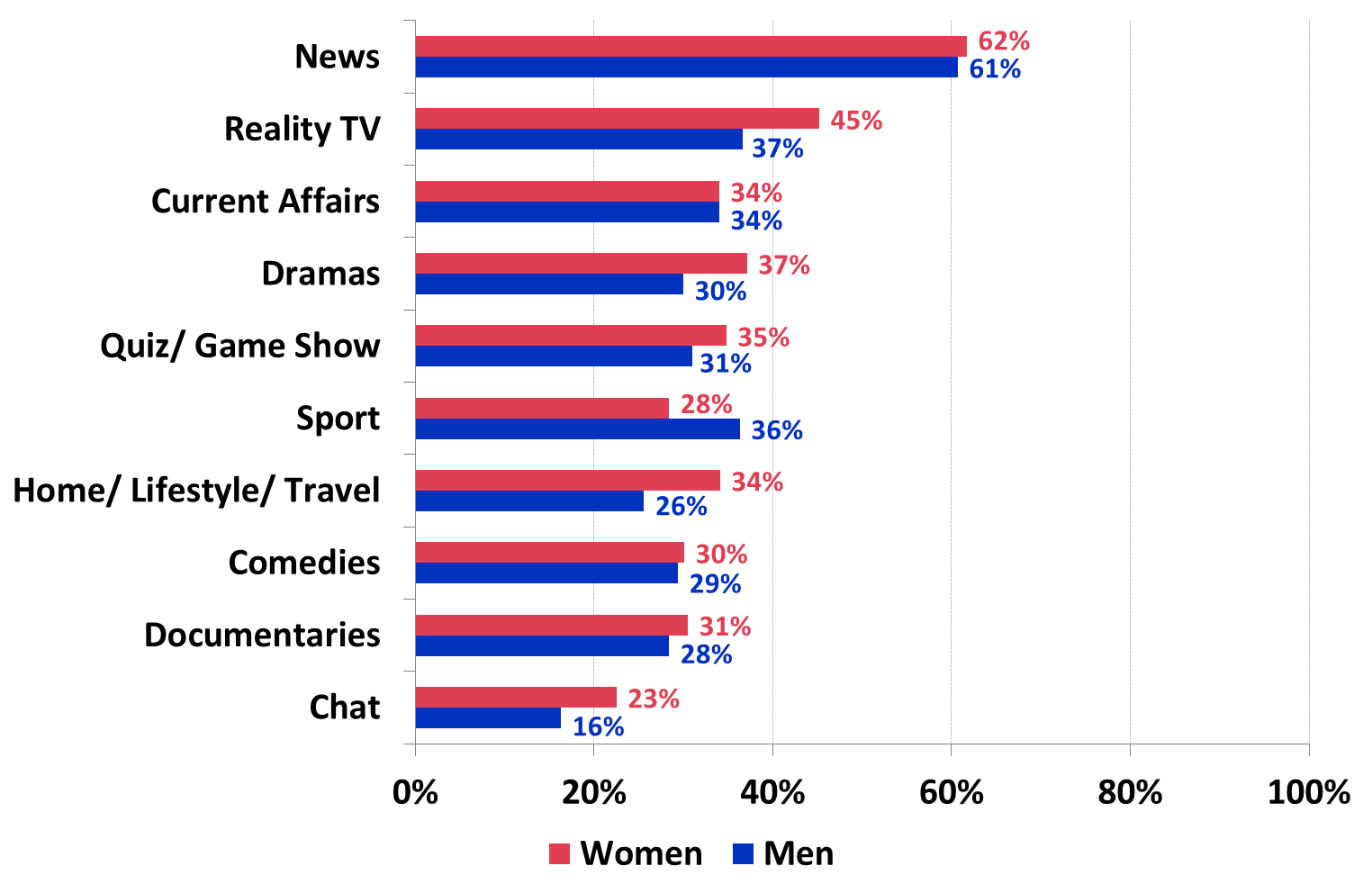 Commenting on the study, Roy Morgan CEO Michele Levine said: “Over three-fifths of Australians watch the news on TV in an average week – far higher than the viewership of any other category and this fact underlies the importance TV networks place on providing a comprehensive run-down of the day’s news in their 6pm (or 7pm) daily early evening news broadcasts.

“Coming in unchallenged in second place is reality TV watched by 42 per cent of Australians and including some of the most popular shows on TV such as My Kitchen Rules, MasterChef Australia, The Bachelor and The Bachelorette.

“The impressive viewership numbers these shows attract are a key reason why we are likely to see more reality TV shows on our screens in the years ahead as Australia’s commercial TV networks compete with streaming video on demand services such as Netflix – now viewed by more than 11 million Australians.

“This spread of varied TV genres underlines the importance attached to understanding the different types of Australians that are attracted to these very different shows. To get the most ‘bang for the advertising buck’ it is vital to have a full understanding of who is watching what.”