This year’s World Cup Finals in Russia will inevitably lead to a significant spike in viewership to challenge the high of over 4.2 million viewers achieved four years ago.

The FIFA World Cup is considerably more popular among men than women. Over 2.1 million men watch the FIFA World Cup compared to just under 900,000 women and these enthusiasm levels are replicated when analysing the TV viewing habits of different generations. 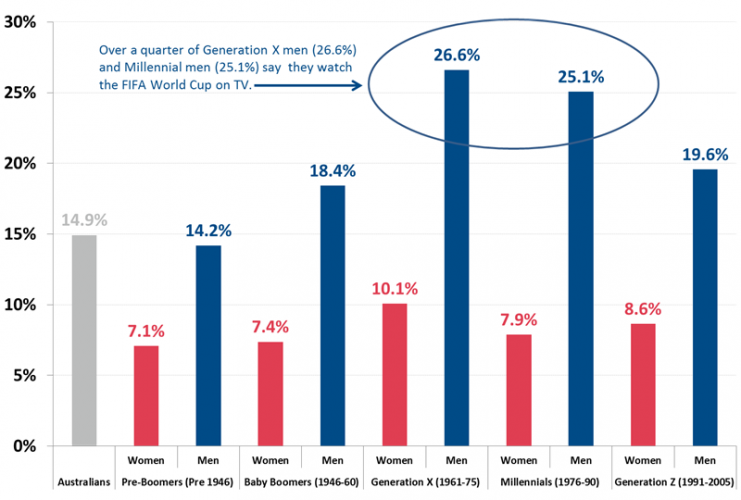 Analysing the long-term trends on TV viewership of the FIFA World Cup shows the positive impact the holding of the tournament has on attracting people to watch the games.

Since peaking immediately following the previous tournament TV viewership of the FIFA World Cup has fallen by around a third and in the six month period to March 2018 14.9 per cent of Australians now say they watch the FIFA World Cup on TV. 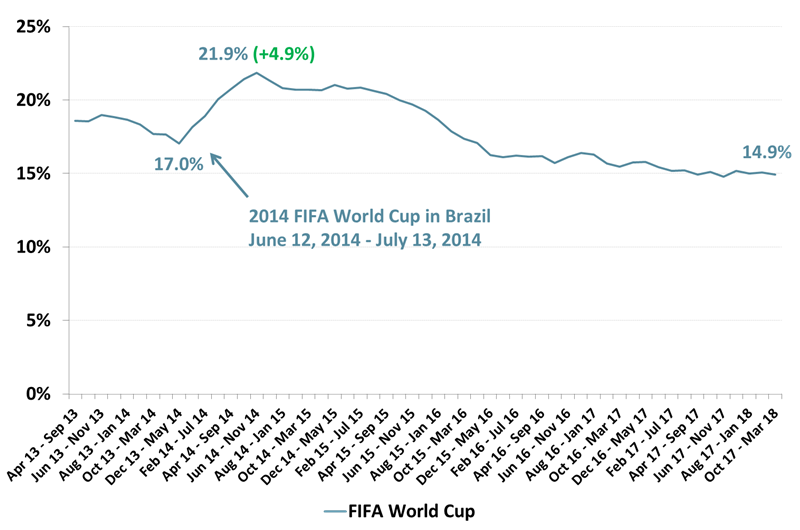 Commenting on the study, Roy Morgan CEO Michele Levine said: “The Socceroos journey to the FIFA World Cup was longer than any other team at Russia 2018 playing 22 games and traveling an estimated 250,000km in qualifying before victory against Honduras secured one of the last spots at the showpiece. For Australian fans enjoying the spectacle in Russia this month it was certainly worth it.

“Unsurprisingly it is Australian men of all ages who are the biggest fans of the FIFA World Cup compared to similarly aged women. Over a quarter of men in the highly coveted age brackets covered by Generation X (26.6 per cent) and Millennials (25.1 per cnt) say they watch the FIFA World Cup on TV – more than twice the rate of women of the same age. Men in these generations were born between 1961-1990 and are now aged 27-57 years old.

“Although viewership does drop off for the youngest generation born between 1991-2005 known as Generation Z, it is worth remembering that some members of Generation Z were only nine or ten years old the last time Australia played in a FIFA World Cup and are likely still developing their passion for the game.

“A quick look at the figures for the different States shows interest in the FIFA World Cup is highest in Australia’s two largest States. Some 17.1 per cent of people living in NSW say they watch the FIFA World Cup on TV and as do 16.8 per cent of Victorians compared to only 9.5 per cent of Tasmanians. The fact over half of Australia’s A-League teams are based in these two States also indicates the level of interest for World football particularly in Melbourne and Sydney,” Levine said.