Mood Media has launched a global study, The State of Brick & Mortar: 2017, revealing motivations and influences in shopping behaviour and consumer insights into retail experiences.

The quantitative study is based on a survey of more than 11,000 consumers in nine countries across the globe, including Australia, China, France, Germany, the Netherlands, Russia, Spain, the United Kingdom and the United States.

A total of 1,000 consumers were interviewed in Australia. Of those surveyed, over 70 per cent of under-45s would like to receive redeemable promotions on their mobile device whilst in store, 86 per cent of all surveyed believe music makes the shopping experience more enjoyable, and 64 per cent of Millennials would rather shop in-store than online if the right mood or atmosphere is created.

According to the study, 78 per cent of global consumers cite ‘the ability to touch, feel and try products’ as their number one reason for shopping in bricks-and-mortar stores. The figure is similar in Australia at 76 per cent. 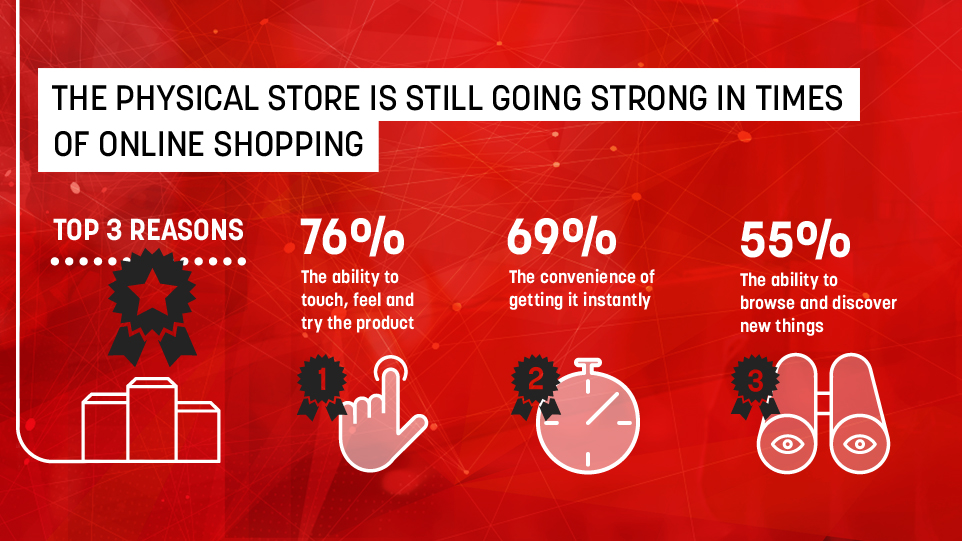 Items or sizes being out of stock was the most common frustration across Australia (56 per cent), particularly among younger shoppers. Waiting in line represents the second most frustrating aspect of in-store shopping (55 per cent), with a too busy and hectic atmosphere following as the third top irritant (45 per cent). 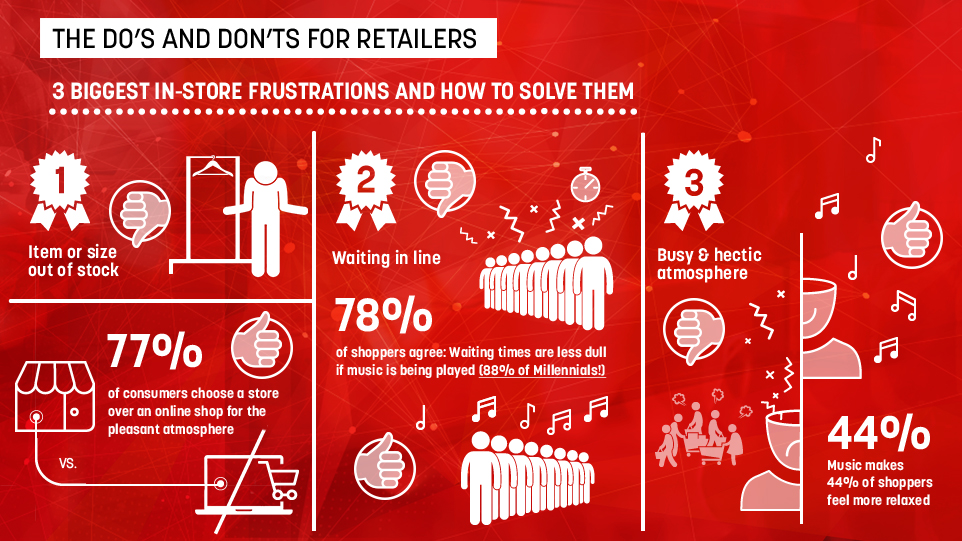 Music is a crucial ingredient

Music appears to provide quite the tonic for in-store frustrations, with eight out of ten people globally finding waiting times to be less dull when music is playing.

Music proves particularly influential in the in-store experience, with over 80 per cent of respondents asserting that music makes their shopping experience more enjoyable and lifts their mood.

Shoppers most influenced by music while shopping are those in Australia, China, the USA, and Netherlands, with over 90 per cent of consumers from each country registering positive emotions.

Music can have a real impact on shoppers’ mood, with 90 per cent of consumers experiencing positive feelings when the right music is playing in a store. Positive feelings include feeling welcome, relaxed and inspired.

Australian’s describe feeling particularly happy when their favourite tunes are played (49 per cent) while consumers from the Netherlands feel that music is most important in providing a sociable atmosphere (62 per cent).

Furthermore, 84 per cent of young shoppers in Australia would like to influence the music in-store.

Two-thirds of those globally surveyed assert that they feel more connected to brands that play the right music. The majority is composed of the youngest generation, which often appear the hardest to engage, while Baby Boomers are the least likely to feel connected to a brand that plays the right music, despite often being considered as the most loyal customers.

The research found that there is a direct correlation between the absence of music and negative feelings for consumers, with more than half of respondents globally (56 per cent in Australia) claiming to feel uncomfortable, angry or depressed when there is no music playing in a shop.

Furthermore, 68 per cent of Millennials cited an enjoyable, branded in-store atmosphere would make them more likely to stay in-store for longer.

In nearly all instances across the world, those aged 18-34 rate the atmosphere and experience to be more important than any other age group, with one in three citing it is as the top reason to choose in-store over shopping online.

When it comes to making unplanned purchases, 62 per cent of Australian consumers across all ages cite that discounts and promotions most influence their impulse purchases, with men being slightly more sensitive to this leverage.

A third of consumers cite ‘feeling in the right mood’ as their top driver, with younger generations being more influenced by the store atmosphere than older ones.

Consumers want to be a part of the in-store experience

According to the study, almost three quarters of Millennials from across Australia assert that they would like the opportunity to influence music played in-store. Australia is the top country overall wanting to be able to influence the music playing in-store (49 per cent versus 41 per cent of worldwide respondents).

Mood Media’s research uncovered an increasing worldwide demand for interactive technology to be incorporated into the in-store experience, with more than half of people surveyed enthused by the possibility of being able to receive redeemable promotions on their mobile phones while in-store.

The widespread introduction of mobile promotions would be good news for consumers in the UK, with bargain-hunting Brits topping the global poll for using their mobile phones to see whether they can find products for a cheaper price elsewhere.

In comparison, shoppers from Australia are most likely to use their mobile to scour social media, while shoppers in Spain use their phones to ask for advice from family and friends.

The use of mobile varies amongst generations. While Generation Z and Millennials often use their phone while shopping to check their social media platforms, Baby Boomers only use it sporadically – primarily to get advice from their friends.

When asked what type of stores they would like to receive redeemable mobile promotions from, Baby Boomers, Generation X and Millennials from most countries including Australia select supermarkets and grocery, while the youngest generation select clothing and footwear.

On the other end of the scale, offers from banking/financial institutes represent the least interesting opportunities from all age groups.