Advertising is increasingly moving online which is good news for advertisers as 80 per cent of Aussies say the Internet is the ‘Media Most Useful’ for providing purchase-related information in the year to September 2017 according to new research by Roy Morgan.

Media Most Useful for providing Consumer Information (Across any category*) 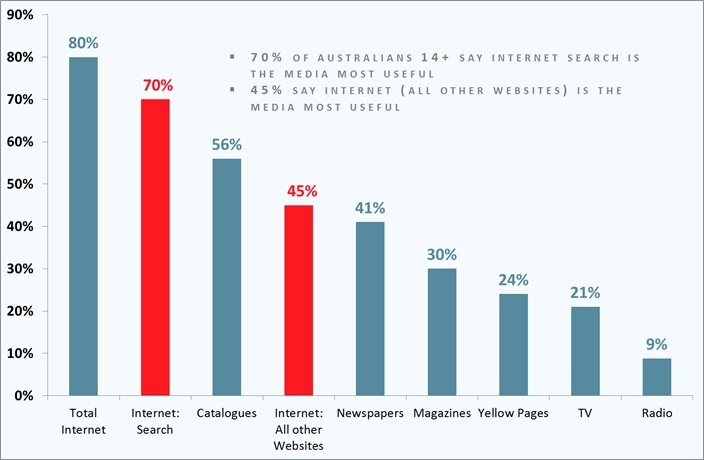 Internet Search leads the way for Travel or accommodation, Restaurants, Cars and Insurance

The internet is the leading source of information for Aussies across most shopping categories these days, and there are some categories in which Internet Search clearly dominates all other media.

The leading category for both internet, and specifically Internet Search, is travel and accommodation – for which 67 per cent of us consider the internet in general and 48 per cent of Australians internet search in particular the most useful medium compared to 22 per cent that use non-search websites.

Catalogues are Media Most Useful for Groceries & Alcoholic beverages

Despite the rise of digital media in recent decades there are certain product categories that consumers prefer more traditional media to find out information when they’re buying. There is none larger than the huge Australian grocery market valued at over $103 billion according to the latest Roy Morgan data.

Nearly four million Australians read either Coles Magazine (3,975,000) or rival Woolworth’s Fresh (3,828,000) according to Roy Morgan magazine readership results. Alongside that wide reach comes recognition by consumers – 45 per cent of Australians regard catalogues as the most useful medium for purchasing groceries compared to 28 per cent for the internet and less than five per cent for each of the other media categories.

Groceries isn’t the only category in which catalogues retain leadership with Australians looking for information to purchase alcohol also favouring catalogues (39 per cent) over the internet (30 per cent), newspapers (foru per cent) and all other types of media. 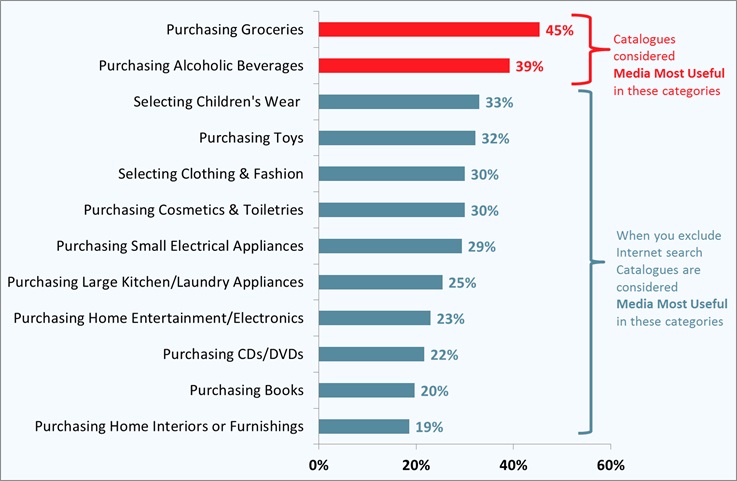