A new study by research firm Roy Morgan has found that 66.3 per cent of Aussies consume alcohol in an average four weeks, while 13 per cent admitted to drinking the trifecta – beer, wine and spirits.

For the two-thirds of Australians that do drink alcohol on a regular basis wine is the most popular choice with 41.3 per cent drinking wine in an average four weeks compared to 37.6 per cent that drink beer.

In addition 37.6 per cent drink another type of alcohol including at least one of spirits, cider, RTDs or liqueurs.

However, despite the one-in-eight Australians that drink beer, wine and something else, overall incidence of alcohol consumption has continued to decline gently over the last five years from 69.8 per cent in mid-2014.

All major categories of alcoholic drinks showed decline in incidence over this period although deeper analysis within gender and age groups reveals some types of alcohol are growing in popularity for different segments of the population.
Beer is still the ‘Volume King’ for Australians

Although wine is the most popular alcoholic drink in terms of the number of drinkers, beer is clearly the top in terms of volume (based on glasses). The following chart shows that beer accounts for 45.3 per cent of the volume of alcoholic drinks consumed more than wine (29.2 per cent) and spirits (13.2 per cent) combined.

Other forms of alcohol comprise the remaining 12.5 per cent of alcohol consumption volume including RTD (5.8 per cent), cider (3.5 per cnet), liqueurs (1.2 per cent), fortified wine (0.9 per cent) and other alcohol (one per cent). 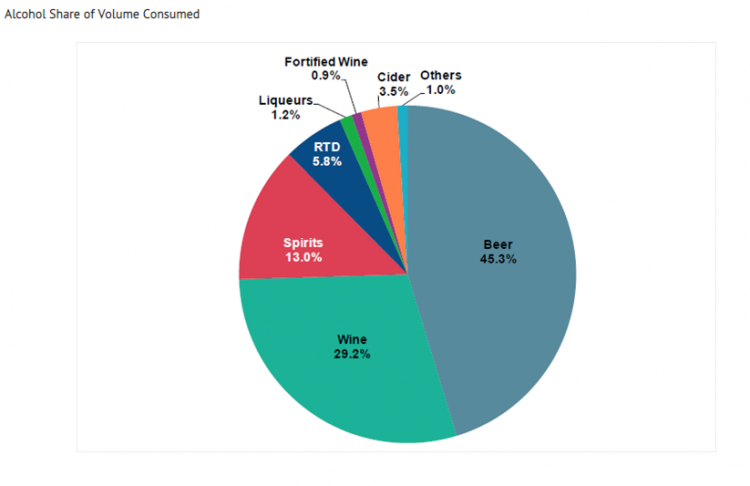 Commenting on the research, Roy Morgan CEO Michele Levien said: “Australians’ love of alcohol is well-known although the latest research from Roy Morgan shows that a declining proportion of Australians are now drinking alcohol. Now just on two-thirds of Australians (66.3 per cent) drink alcohol in an average four weeks, down 3.5 per cent points from five years ago (69.8 per cent) in mid-2014.

“Wine is again the most widely drunk alcoholic beverage with 41.3 per cent of Australians drinking a glass of their favourite drop in an average four weeks compared to 37.6 per cent that drink beer and just over a quarter (26.3 per cent) that drink spirits. The growth of cider as a newly popular drink of choice has plateaued in recent years with just over one-in-10 Australians now drinking cider.

“Although the incidence of alcohol consumption amongst Australians has fallen there are a significant 12.8 per cent of Australians who like to drink several different types of alcohol including beer, wine and at least one (or more) of spirits, RTDs, liqueurs or cider in an average four weeks.

“Being able to identify and profile who these one-in-eight Australians are and where to find them is of vital importance to any alcohol retailers and distributors looking to shore up their market share in a market which is reaching a declining proportion of the population,” Levine said.


Advertise with us
Connect with:
LinkedIn