Advertise with us
Posted 5 September, 2019


Sportsbet has scoured the globe to find a compelling collection of famous fools, assembling them to promote its new, ‘Foolproof’ iPhone app in a campaign created by Sportsbet’s internal creative team in collaboration with Emotive.

With its enhanced design, improved navigation and added shortcuts, Sportsbet’s Foolproof iPhone app is now so easy to use, even someone who ate a curry before a 16-hour flight could get their heads around it.

Brought to life with the help of FINCH, the campaign leads with a suite of video assets, including a long-form social film, 30” and 15” second TV spots and 6” second digital shorts.

Watch the long form TVCs below:

Working alongside the film is a series of radio executions, which further elevate the platform by playing on the gullibility of listeners mistaking cosmetic height surgery and mail order oysters for real businesses.

Listen to the radio spots HERE.

Contextual OOH in airports, gyms and roadside locations across the country also support the campaign. 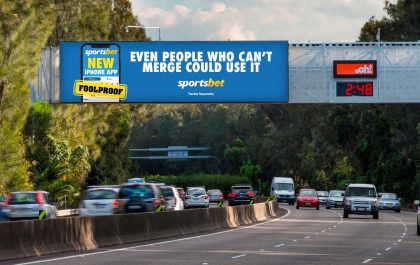 Sportsbet general manager marketing, Tim Hernadi said: “This campaign has been developed with the Sportsbet audience clearly in mind.

“Designed to bring a smile to peoples’ faces by taking the mickey in an endearing way, it simply highlights how Sportsbet’s new iPhone app is so easy to use, it’s foolproof.”

Emotive group creative director, Ben Clare added: “You’ll never be everything to everyone.

“And that’s what makes it so liberating to work on Sportsbet.

“The confidence they have in their own brand DNA, and a willingness to take risks in a world that seems so averse to them right now, allowed us to create something timely and true to the brand’s voice.

“And have a lot fun doing it.”