Italy’s top football league, Serie A, has gone (further) into damage control after an anti-racism campaign was labelled as racist.

The nation’s top league has been plagued by racist fans that regularly taunt players of African or middle eastern origin. 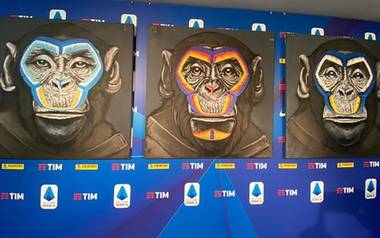 Calling it a “serious problem”, the game’s officials launched a “No To Racism” campaign that, rather awkwardly, used three monkeys in the imagery.

Players of African origin are often likened to monkeys by racists in Italy’s football stadiums.

And the campaign has been widely criticised by football clubs and discriminatory groups. 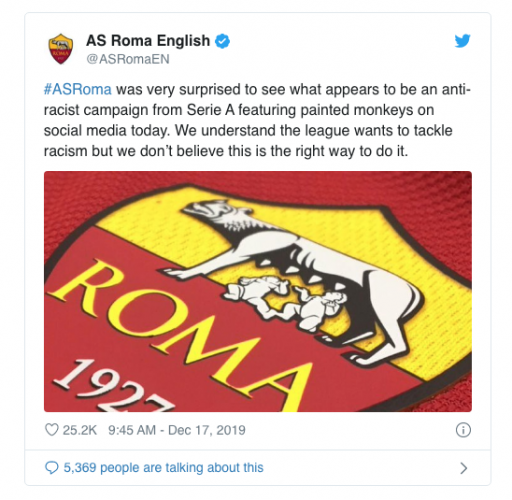 “In a country in which the authorities fail to deal with racism week after week, Serie A have launched a campaign that looks like a sick joke.

“These creations are an outrage; they will be counter-productive and continue the dehumanisation of people of African heritage. It is time for the progressive clubs in the league to make their voice heard,” Fare said in a statement.

In a statement to Serie A’s CEO, Luigi De Siervo, expressed his “sincere apologies for the artwork” and said he realised it was “inappropriate”.

However, the artist behind the campaign, Simone Fugazzotto, defended his work saying “we are all monkeys”.

Fugazzotto, who always uses monkeys in his work, added: “For an artist there is nothing more important than trying to change the perception of things through his own work.

“I decided to portray monkeys to talk about racism because they are the metaphor for human beings. Last year I was at the stadium to see Inter v Napoli [a match in which Napoli defender Kalidou Koulibaly was racially abused] and I felt humiliated, everyone was shouting ‘monkey’ at Koulibaly, a player I respect.

“I’ve always been painting monkeys for five to six years, so I thought I’d make this work to teach that we’re all apes, I made the western monkey with blue and white eyes, the Asian monkey with almond-shaped eyes and the black monkey positioned in the centre, where everything comes from. The monkey becomes the spark to teach everyone that there is no difference, there is no man or monkey, we are all alike. If anything we are all monkeys.”

Anti-discrimination body Kick It Out added: “Serie A’s use of monkeys in their anti-racism campaign is completely inappropriate, undermines any positive intent and will be counter-productive. We hope that the league reviews and replaces their campaign graphics.”